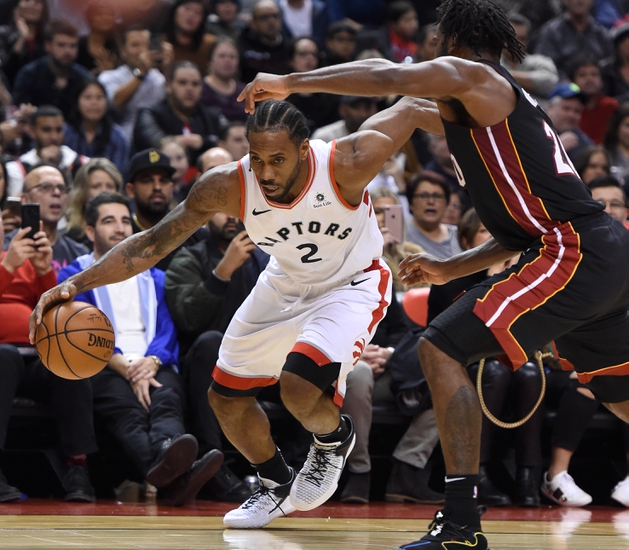 The Miami Heat play host to the Toronto Raptors at the American Airlines Arena on Wednesday night.
The Toronto Raptors have cooled off a bit lately as they've lost five of their last nine games and they will be looking to bounce back after having their two-game win streak snapped by the 76ers in a 126-101 blowout on Saturday. Pascal Siakam led the team in scoring with 26 points, Kyle Lowry added 20 points with five assists while Norman Powell chipped in with 13 points off the bench. As a team, the Raptors shot just 38 percent from the field and a miserly 10 of 40 from the 3-point line as they struggled to keep up with the 76ers without their best player in Kawhi Leonard. With the poor loss, Toronto fell to 25-10 on the season which is still good for first place in the Eastern Conference standings.
Meanwhile, the Miami Heat have been in red-hot form as they've won nine of their past 12 games and they will be looking to build on their current five-game win streak after cruising past the Magic in a 115-91 road win on Sunday. Tyler Johnson drained six 3-pointers to lead the team with 25 points, Justise Winslow added 22 points with five assists and four steals while Josh Richardson chipped in with 15 points, 10 rebounds and four assists. As a team, the Heat shot a healthy 50 percent from the field and 16 of 31 from the 3-point line as they made light work of the Magic, jumping out to an early 19-point lead in the second quarter before putting the game to bed in the third quarter. With the dominant win, Miami improved to 16-16 overall and 9-7 on the road.
Looking at the betting trends, the Raptors are 2-5 ATS in their last seven road games, 0-4 ATS in their last four games playing on three or more days rest and 1-4 ATS in their last five games overall. The Heat are 6-0 ATS in their last six games following a win, 4-1 ATS in their last five home games and 5-0 ATS in their last five games overall.
Head to head, the road team is 5-1 ATS in the last six meetings, the Raptors are 1-4 ATS in the last five meetings in Miami and 0-5 ATS in the last five meetings overall.
The Raptors have been the benchmark of the Eastern Conference so far, but they've fallen off the pace lately and are suddenly looking a little vulnerable against a Heat team who have suddenly sprung to life after struggling at that start of the season. It's no surprise that the Raptors are favored as the road team here, but the Heat are on a nice roll at the moment and they know that a win here would do wonders for their confidence. With that being said, I like the Heat with the points in what should be a close one.