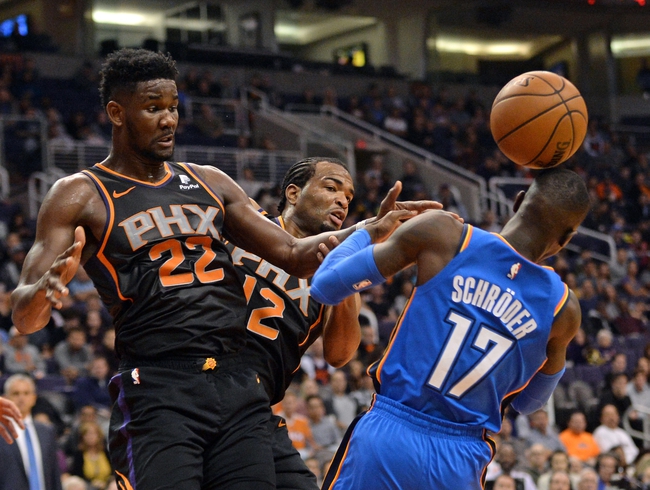 The Phoenix Suns play host to the Oklahoma City Thunder at the Talking Stick Resort Arena on Friday night.

The Oklahoma City Thunder have split their last eight games and they will be hoping to avoid a third straight defeat after falling to the Rockets in a 113-109 road loss on Christmas Day. Paul George led the team with 28 points and 14 rebounds, Russell Westbrook added 21 points with seven assists while Steven Adams chipped in with 17 points. As a team, the Thunder shot 43 percent from the field and nine of 30 from the 3-point line but defensively, they didn't have an answer for the Rockets' James Harden who scorched them for 41 points and seven assists. Alex Abrines missed the Christmas Day game with an illness and has already been ruled out for Friday's game. With the loss, Oklahoma City fell to 21-12 overall and 9-8 on the road.
Meanwhile, the Phoenix Suns have struck a bit of form with five wins in their last seven outings and they will be looking to stay hot after edging out the Magic in a 122-120 overtime road win on Wednesday. Devin Booker led the team with 35 points, seven rebounds and eight assists, TJ Warren added 24 points while Kelly Oubre Jr. provided the spark off the bench with 19 points. As a team, the Suns shot 45 percent from the field and 14 of 36 from the 3-point line as they escaped with the narrow win in overtime after shooting themselves in the foot when they fouled a 3-point shooter with a three-point lead in the final seconds of regulation. With the win, Phoenix improved to 9-26 overall and 4-15 on the road.
Looking at the betting trends, the Thunder are 5-0 ATS in their last five games playing on two days rest, 9-3 ATS in their last 12 games against a team below .400 and 2-5 ATS in their last seven against the Western Conference.
Head to head, the over is 21-10 in the last 31 meetings and the Thunder are 4-1 ATS in the last five meetings.
The Thunder will be aiming for a season sweep of the Suns as they've already beaten them three times this season. The Thunder are clearly the better team on paper and on the court, but they've stumbled in their last two games while the Suns are playing some of their best basketball of the season. I'm tempted to take the Suns with the points, but I think the Thunder complete the season sweep with a comfortable win in this one behind big games from Westbrook and George who is currently listed as a game-time decision for Friday.