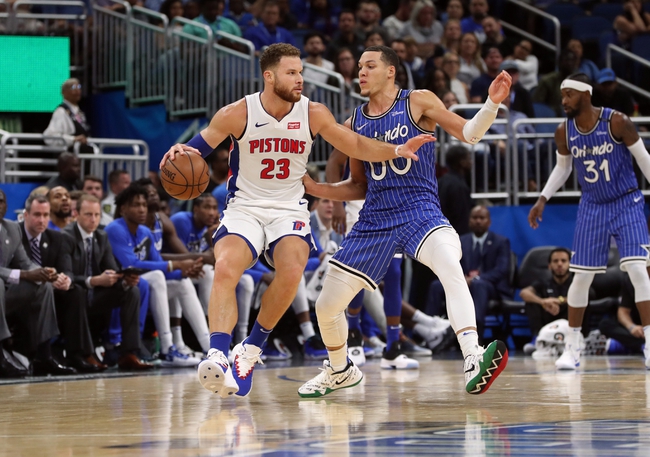 The Detroit Pistons and the Orlando Magic duke it out at the Amway Center on Sunday night.

The Detroit Pistons have been in rough shape as they’ve lost 10 of their last 13 games and they will be looking to bounce back after falling to the Pacers in a 125-88 road loss on Friday. Blake Griffin led the team with 18 points, seven rebounds and five assists, Reggie Bullock added 13 points while Luke Kennard chipped in with 14 points off the bench. As a team, the Pistons shot just 37 percent from the field and nine of 36 from the 3-point line but they never threatened after falling behind by double digits early. With the loss, Detroit fell to 16-17 overall and 5-9 on the road.

Meanwhile, the Orlando Magic have been in a bit of a funk as they’ve lost seven of their last 10 games but they will be feeling pretty good after snapping a four-game skid with a 116-87 win over the Raptors on Friday. Nikola Vucevic led the team with 30 points, 20 rebounds and eight assists, DJ Augustin added 17 points with six assists wwhile Jonathan Isaac and Terrence Ross each scored 14 points. As a team, the Magic shot 47 percent from the field as they outscored the Raptors in the second and third quarters by a combined 67-34. With the dominant win, Orlando improved to 15-19 overall and 9-11 at home.

The Pistons have been playing well below their best lately and they certainly didn’t look good in their 37-point loss to the Pacers in their last outing. The Magic haven’t been much better than the Pistons, but they will take plenty of confidence from their dominant win over the Raptors and they are also 6-1 ATS in the last seven meetings overall. With that being said, I’m taking the Magic to win this one by single digits.