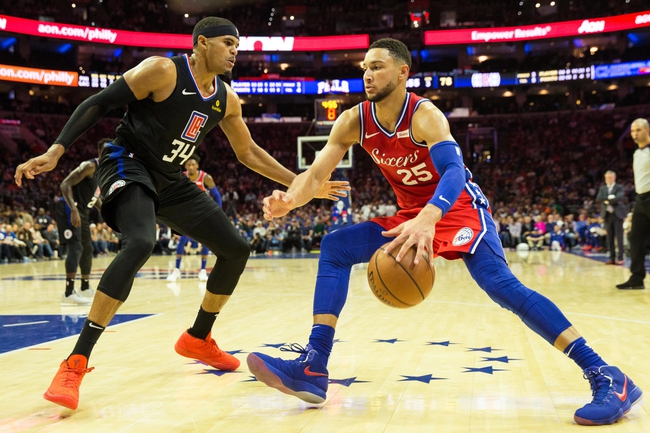 The Philadelphia 76ers pay a visit to the Los Angeles Clippers at the STAPLES Center on Tuesday night.

The Philadelphia 76ers have been in a bit of a rut as they’ve lost five of their last nine games and they will be looking to bounce back after getting routed by the Trailblazers in a 129-95 road loss on Sunday. Ben Simmons led the team with 19 points, TJ McConnell added 14 points off the bench while JJ Redick chipped in with 11 points. As a team, the 76ers shot just 35 percent from the field while allowing the Trailblazers to shoot 59 percent as they fell behind by 70-41 at halftime. Jimmy Butler was a complete non-factor as he scored just five points while Joel Embiid sat out the game with left knee soreness and is currently listed as questionable for Tuesday.

Meanwhile, the Los Angeles Clippers have been in decent form as they’ve won four of their last six games but they will be aiming to bounce back after falling to the Spurs in a 122-111 home loss on Saturday. Danilo Gallinari led all starters with 21 points, Montrezl Harrell provided the spark off the bench with 21 points and four steals while Tobias Harris and Lou Williams each scored 16 points. As a team, the Clippers shot 43 percent from the field and nine of 20 from the 3-point line but they just never recovered after getting outscored by 39-19 in the third quarter. With the loss, Los Angeles fell to 21-15 overall and 12-5 at home.

The 76ers are a solid 6-0 ATS in the last six meetings but they showed on Sunday how much they rely on Embiid so I don’t like their chances if he isn’t available in this one. With that being said, the Clippers have been in great form and they’re especially good against the better teams in the league as they are 8-1 ATS in the last nine meetings against a team above .600. With that being said, I’m going with the Clippers to take care of business at home against the shorthanded 76ers.