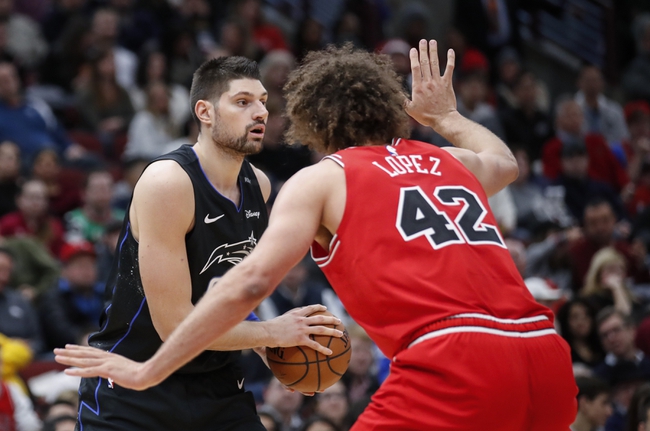 The Orlando Magic pay a visit to the Chicago Bulls at the United Center on Wednesday night.

The Orlando Magic have been in a bit of a rut as they’ve lost five of their last seven games and they will be looking to bounce back after falling to the Hornets in a 125-100 road loss on Monday. Aaron Gordon led the team in scoring with just 14 points and five assists, Nikola Vucevic scored 12 points while Jonathan Isaac chipped in with 11 points. As a team, the Magic shot just 41 percent from the field and 10 of 35 from the 3-point line which wasn’t enough to hang with the Hornets who had six players finish in double figures led by 24 points from Kemba Walker. With the loss, Orlando fell to 16-20 overall and 6-9 on the road.

Meanwhile, the Chicago Bulls have been in decent form as they’ve won three of their last five games but they will be looking to rebound after falling just short against the Raptors in a 95-89 road loss on Sunday. Lauri Markkanen led the team with 18 points and 10 rebounds, Wendell Carter Jr. added 16 points with 11 rebounds while Kris Dunn chipped in with 14 points and eight assists. As a team, the Bulls shot just 41 percent from the field and seven of 20 from the 3-point line as they fell just short despite a hot defense start where they held the Raptors to just 14 points in the first quarter. With the tough loss, Chicago dropped to 10-27 overall and 5-14 on the road.

On paper, the Magic are clearly the better team but they’ve been in a funk lately compared to the Bulls who are currently on a nice little run over their last five games where they’ve won three while covering the spread in four. This one could go either way, but the Bulls are 4-1 ATS in the last five meetings in Chicago and I think they stay on their nice run with another win here.