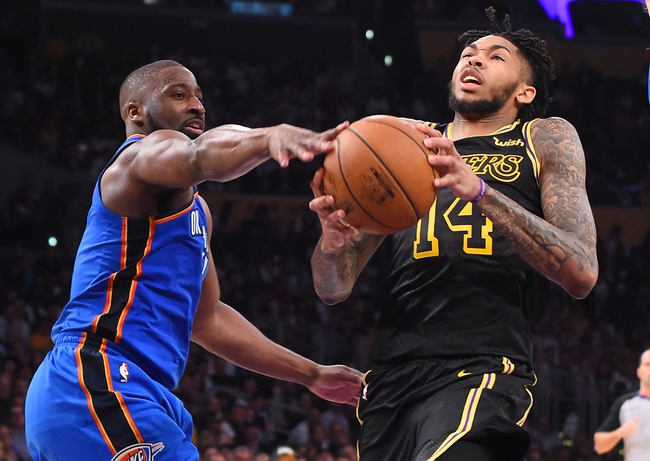 The Oklahoma City Thunder and the Los Angeles Lakers duke it out at the STAPLES Center on Wednesday night.

The Oklahoma City Thunder have been in great form as they’ve won six of their last nine games and they will be looking to stay hot after blowing past the Mavericks in a 122-102 home win on Monday. Russell Westbrook led the team with a triple-double of 32 points with 11 rebounds and 11 assists, Paul George added 22 points on seven of 21 shooting while Jerami Grant chipped in with 16 points. As a team, the Thunder shot 44 percent from the field and just six of 24 from the 3-point line but they were ferocious on the defensive end as they forced the Mavericks into 27 turnovers to cruise to victory after leading by 17 points going into halftime. With the win, Oklahoma City improved to 23-13 overall and 13-4 at home.

Meanwhile, the Los Angeles Lakers haven’t been at their best as they’ve lost five of their last eight games but they will be feeling much better after snapping a two-game skid with a 121-114 win over the Kings in their first game without the injured LeBron James. Kentavious Caldwell-Pope led the team with 26 points off the bench, Josh Hart added 22 points on eight of 14 shooting, Brandon Ingram added 21 points with seven rebounds and nine assists while Kyle Kuzma chipped in with 18 points, nine rebounds and six assists. As a team, the Lakers shot 48 percent from the field and 15 of 44 from the 3-point line but they trailed for most of the game until the fourth quarter where they ramped up their defense to outscore the Kings by 29-18. With the win, Los Angeles improved to 21-16 overall and 13-6 at home.

LeBron James has already been ruled out for Wednesday but the young Lakers already showed that they could win without him in their spirited comeback win over the Kings. The Lakers will also be well-rested as they haven’t played since Saturday, but I have to give the edge to the red-hot Thunder who are 9-4 ATS in the last 13 meetings against the Lakers. I think Westbrook and George will be too much for the shorthanded Lakers in this meeting.