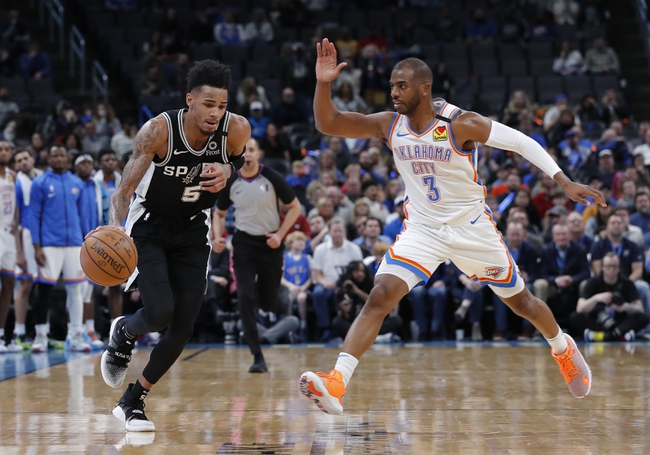 The Oklahoma City Thunder play host to the San Antonio Spurs at the Chesapeake Energy Arena on Sunday night.

The San Antonio Spurs have been in a funk for a while now, but they seem to have recovered from their five-game skid with a couple of wins on the trot after taking down the Jazz in a 113-104 road win on Friday. Dejounte Murray led the team with 23 points, seven rebounds and four assists, DeMar DeRozan added 18 points with seven assists while Patty Mills and LaMarcus Aldridge each scored 15 points. As a team, the Spurs shot 44 percent from the field and 10 of 20 from the 3-point line as they set the tone held the Jazz to just 21 points in the first quarter, before exploding for 38 points in the second quarter to lead by as many as 25 points, before taking their foot off the gas in the second half.

Meanwhile, the Oklahoma City Thunder have been in great form as they’ve won 11 of their past 14 games and they will be aiming for a third straight victory after blowing past the Nuggets in a 113-101 home win on Friday. Chris Paul led the way with 29 points on 11 of 17 shooting, Steven Adams added 19 points with 17 rebounds and four steals while Danilo Gallinari chipped in with 15 points on four of 14 shooting. As a team, the Thunder shot 46 percent from the field and nine of 26 from the 3-point line as they squandered an early 10-point lead before rallying in the fourth quarter where they outscored the Nuggets by 35-24 to make it look easy after a close contest for three quarters.

The Spurs have found a bit of form with a couple of wins in a row, but they’ve been anything but consistent this season. Meanwhile, the Thunder have been on fire lately and they just took down the Nuggets, so they will be full of confidence coming into this one. The Thunder are 19-7 ATS in their last 26 games against a team with a losing record and I think that trend continues here as the Thunder have simply been the more reliable team from the start of the season. This should be a close one, but in the end I think the Thunder pull away for the win and cover at home.