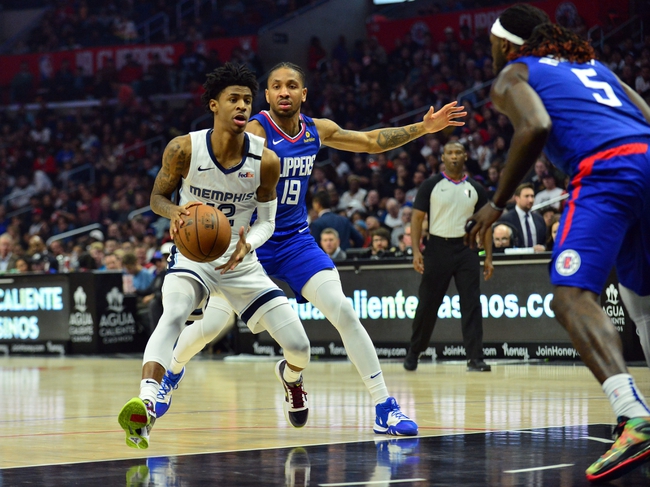 The Memphis Grizzlies and the Los Angeles Clippers duke it out at the Staples Center on Monday night.

The Memphis Grizzlies have been in great form for a while now as they’ve won eight of their past 12 games, but they will be hoping to avoid a third straight defeat after getting routed by the Lakers in a 117-105 road loss on Friday. Josh Jackson led the team in scoring with 20 points on nine of 12 shooting off the bench, Ja MOrant added 17 points while Brandon Clarke and Gorgui Dieng each scored 14 points. As a team, the Grizzlies shot 45 percent from the field and a miserly five of 16 from the 3-point line as they were slow to start and were always playing from behind after falling behind by 60-41 going into halftime. Dillon Brooks had a night to forget as he finished with just seven points on three of 14 shooting while Jaren Jackson Jr. played just 16 minutes before sitting out in the second half with soreness after falling awkwardly in the first half.

Meanwhile, the Los Angeles Clippers have been on fire since the start of January, but they’ve cooled off with four losses in their last five games and will be looking to avoid a fourth straight defeat after falling short against the Kings in a 112-103 home loss on Saturday. Kawhi Leonard led the team with 31 points, eight rebounds and five assists, Lou Williams added 24 points off the bench while Montrezl Harrell chipped in with 16 points, but no other player finished in double figures. As a team, the Clippers shot just 39 percent from the field and 10 of 30 from the 3-point line as they were always on the back foot after scoring just 13 points in a nightmarish first quarter and things only got worse in the second half where they allowed the Kings to pour in 58 points.

The Grizzlies are still without Jaren Jackson Jr. who will be reevaluated in two weeks, Paul George is considered questionable for Monday with a hamstring strain while Patrick Beverley is considered questionable with a groin injury, so both teams will be shorthanded for this one. The Grizzlies will be eager to bounce back after tough losses to the Kings and the Lakers, while the Clippers will take any win they can get as they just haven’t been able to snap out of their funk. I’m not surprised the Clippers are heavy favorites at home, but they simply haven’t been playing well enough and consistent enough to warrant such favoritism. Give me the Grizzlies with the handful of points in what should be a close one.