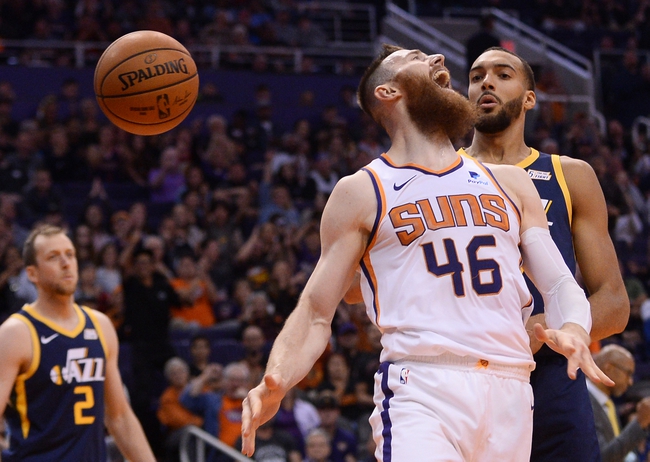 The Utah Jazz play a host to the Phoenix Suns at the Vivint Smart Home Arena on Monday night.

The Phoenix Suns have been in a bit of a rut as they’ve lost seven of their past 10 games, but they will be looking to build some momentum after taking down the slumping Bulls in a 112-104 road win on Saturday. Devin Booker led the team with 29 points, five rebounds and five assists, DeAndre Ayton added 28 points with 19 rebounds and three blocks while Ricky Rubio chipped in with 18 points, seven rebounds and 11 assists. As a team, the Suns shot 44 percent from the field and 10 of 30 from the 3-point line as they struggled in the first half, before taking over in the second half where they outscored the Bulls by 65-47 to make it look easy in the end. Ayton had a great game in his return while Dario Saric and Aron Baynes played just 18 minutes combined in their returns.

Meanwhile, the Utah Jazz have been in a bit of a slump of their own as they’ve lost seven of their past 11 games and they will be hoping to avoid a third straight defeat after falling to the Rockets in a 120-110 home loss on Saturday. Donovan Mitchell led the team with 31 points on 12 of 24 shooting, Jordan Clarkson added 22 points on 10 of 16 shooting off the bench while Mike Conley chipped in with 13 points and seven assists. As a team, the Jazz shot 46 percent from the field and seven of 31 from the 3-point line as they looked to be on top of the Rockets after pouring in 66 points in the first half, but they were sluggish coming out of halftime and quickly found themselves trailing by as many as 16 points in the third quarter where the Rockets outscored them by 38-19.

The Suns have been struggling with injuries all season, but they’re slowly getting healthy again with players like Saric, Ayton and Baynes returning to the court. The Jazz have been one of the streakiest teams all season and they’re currently in a little low on confidence after dropping their last two games. I’m keen to see the Suns improve now that they have their troops back, but there will still be some growing pains so I’m sticking with the Jazz to get the win and cover at home where they’ve won 20 of 27 games so far.