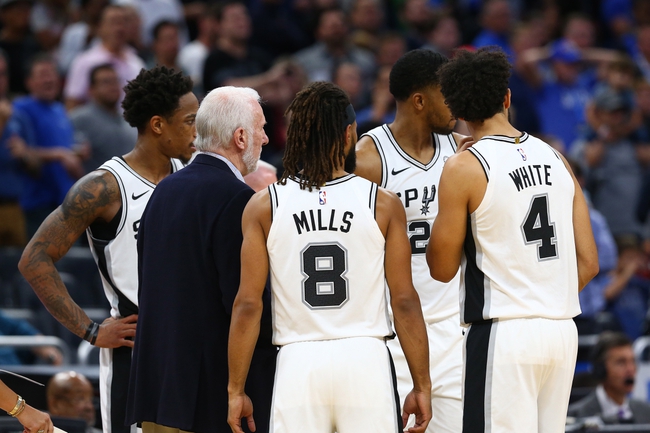 The Orlando Magic pay a visit to the San Antonio Spurs at the AT&T Center on Saturday night.

The Orlando Magic have been in decent shape as they’ve won five of their last six games and they will be aiming for a fourth straight victory after taking down the Timberwolves in a 136-125 home win last night. Terrence Ross led the team with 33 points off the bench, Nikola Vucevic added 27 points with 10 rebounds and five assists while Aaron Gordon chipped in with his first career triple-double of 17 points with 11 rebounds and 12 assists. As a team, the Magic shot a healthy 54 percent from the field and 12 of 40 from the 3-point line as they set the tone with 69 points in the first half, before pulling away in the second half where they poured in another 67 points.

Meanwhile, the San Antonio Spurs have been in rough shape lately as they’ve lost seven of their past nine games and they will be hoping to avoid a third straight defeat after falling just short to the Mavericks in a 109-103 home loss on Wednesday. DeMar DeRozan led the team with 27 points, eight rebounds and nine assists, Marco Belinelli added 14 points off the bench while Lonnie Walker chipped in with 12 points. As a team, the Spurs shot 42 percent from the field and 11 of 33 from the 3-point line as they clawed their way back from an early 19-point deficit to take the lead midway through the fourth quarter, but it was the Mavericks who had the last laugh as they responded with a decisive 16-6 run to come away with the win.

Head to head, the under is 7-3 in the last 10 meetings overall and the Magic are 5-1 ATS in the last six meetings in San Antonio.

These two squads last met on Nov 15 and it was the Magic who won by 111-109 behind 26 points from Evan Fournier but so much has happened since that meeting. The Magic have beenin decent shape in recent games and will be feeling confident after last night’s easy win over the Timberwolves, while the Spurs have been in a rut as they’re coming into this one off a narrow loss to the Mavericks. The Magic are 5-1 ATS in the last six meetings in San Antonio and I think that trend continues as the Magic complete the season sweep in this one.