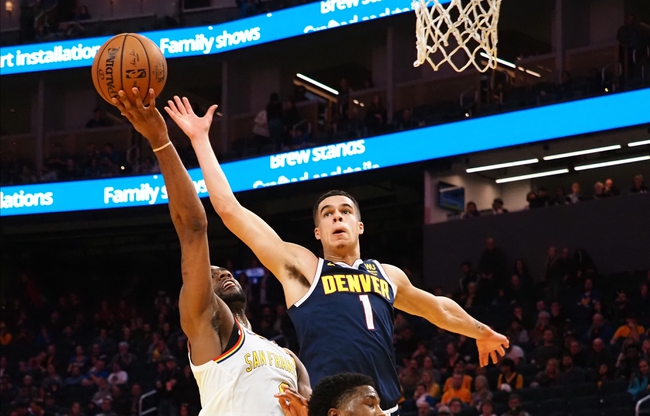 The Denver Nuggets play host to the Golden State Warriors at the Pepsi Center on Tuesday night.

The Golden State Warriors have been in a world of hurt as they've lost 24 of their last 27 games and they will be hoping to bounce back after getting routed by the Wizards in a 124-110 home loss on Sunday. Andrew Wiggins led the team with 27 points on nine of 19 shooting, Eric Paschall and Jordan Poole each scored 17 points while Marquese Chriss chipped in with 12 points, 13 rebounds and two blocks. As a team, the Warriors shot 47 percent from the field and nine of 28 from the 3-point line as they trailed by six points at halftime, before getting blown out in the third quarter to trail by 18 points going into the fourth quarter.

Meanwhile, the Denver Nuggets have been in pretty good shape lately as they've won seven of their past 10 games and they will be looking to stay hot after blowing past the Raptors in a 133-118 home win on Sunday. Nikola Jokic led the team with a triple-double of 23 points with 18 rebounds and 11 assists, Jamal Murray added 22 points with five assists while Jerami Grant chipped in with 16 points and six assists. As a team, the Nuggets shot a healthy 56 percent from the field and 18 of 36 from the 3-point line as they set the tone with 40 points in the first quarter, before running away with it in the fourth quarter where they outscored the Raptors by 33-22 to make it a blowout.

Paul Millsap is currently dealing with a right ankle sprain and is listed as questionable for Tuesday. The Warriors are just sleepwalking their way through the season as they have so little to play for at this stage, while the Nuggets have been building nicely behind the improved play of Jokic and they should be too good once again.