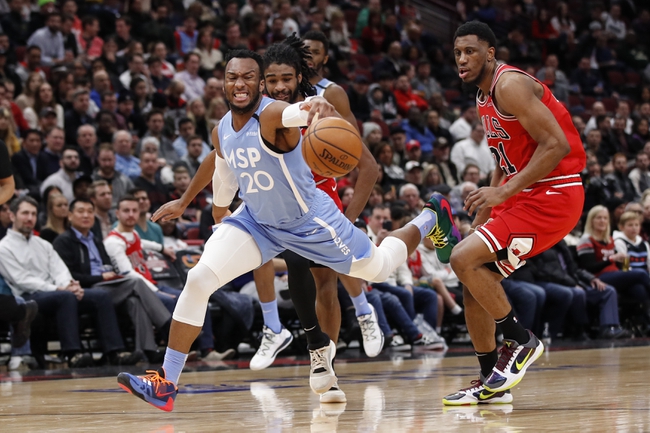 The Chicago Bulls pay a visit to the Minnesota Timberwolves at the Target Center on Wednesday night.

The Chicago Bulls have been in rotten form lately as they've lost 10 of their past 12 games, but they will be looking to build some momentum after pulling off the upset in a 109-107 home win over the Mavericks on Monday. Coby White led the team with 19 points and five assists off the bench, Otto Porter Jr. added 18 points while Denzel Valentine chipped in with 17 points. As a team, the Bulls shot 46 percent from the field and 10 of 36 from the 3-point line as they trailed by 10 points at halftime, before taking over the game in the third quarter where they outscored the Mavericks by 33-17 which allowed them to escape with the unlikely victory as Luka Doncic just missed on the half court game-winner at the buzzer.

Meanwhile, the Minnesota Timberwolves have been in a real slump as they've lost 20 of their last 23 games, but they will be looking to build some momentum after upsetting the Pelicans in a 139-134 road win last night. Malik Beasley led the team in scoring with 28 points on 11 of 13 shooting, D'Angelo Russell added 23 points with eight assists, Juan Hernangomez added 16 points while Naz Reid chipped in with 13 points, 14 rebounds and three assists. As a team, the Timberwolves shot a healthy 55 percent from the field and 14 of 34 from the 3-point line as they poured in 44 points in the second quarter to take a four-point lead at halftime, before escaping with the narrow win after the Pelicans responded with 43 points in the third quarter.

The Bulls were in a major slump before pulling the rabbit out of the hat against the red-hot Mavericks in their last outing despite playing without Zach LaVine. The Timberwolves are just going through the motions with so little to play for at this stage of the season, but they too are coming off a surprise win after downing the Pelicans last night. This should be a close one, but the Bulls are only 2-7 ATS in the last nine meetings overall, so I'm taking the Timberwolves to make it two wins in two nights.