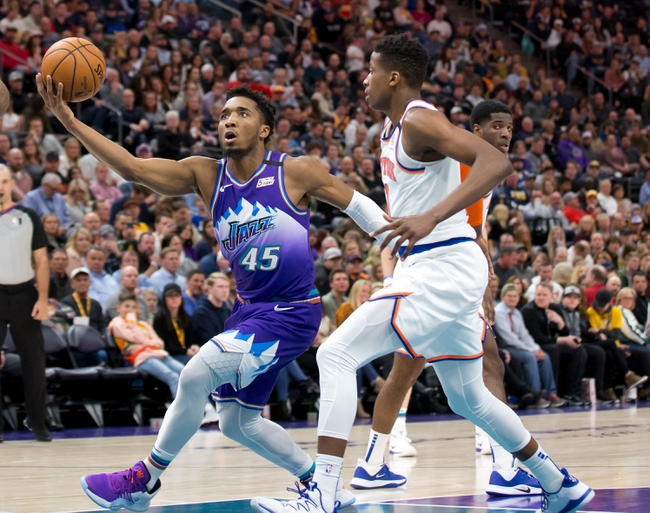 The Utah Jazz pay a visit to the New York Knicks at Madison Square Garden on Wednesday night.

The Utah Jazz have been in decent shape lately as they've won six of their past 10 games and they will be aiming for a third straight victory after blowing past the Cavaliers in a 126-113 road win on Monday. Bojan Bogdanovic led the team in scoring with 28 points, seven rebounds and six assists, Rudy Gobert added 20 points with nine rebounds and five blocks while Donovan Mitchell chipped in with 19 points, nine rebounds and four assists. As a team, the Jazz shot 56 percent from the field and a healthy 20 of 41 from the 3-point line as they started slowly before pouring on 67 points in the second half to finish in a blowout against the injury-depleted Cavaliers.

Meanwhile, the New York Knicks have split their last 12 games and they look to have recovered from their six-game skid as they're now aiming for a third straight victory after sneaking past the Rockets in a 125-123 home win on Monday. RJ Barrett led the team with 27 points, five rebounds and five assists, Julius Randle added 16 points with 16 rebounds and four assists while Bobby Portis and Wayne Ellington each scored 15 points off the bench. As a team, the Knicks shot 48 percent from the field and 12 of 30 from the 3-point line as they jumped all over the Rockets early in the game to lead by as many as 21 points, before holding on for the narrow win as the Rockets' Russell Westbrook missed the potential game-tying shot that would've sent the game into overtime.

The Jazz have been a little streaky this season, but they've played well over their last two games and they are 11-5 ATS in their last 16 road games. The Knicks have been a complete mess all season, but they've won their last two games and will be full of confidence after taking down the red-hot Rockets on Monday. The Jazz are 3-11 ATS in the last 14 meetings in New York, but with the line at single digits, I think the Jazz can buck the trend and finish with the win and cover here.