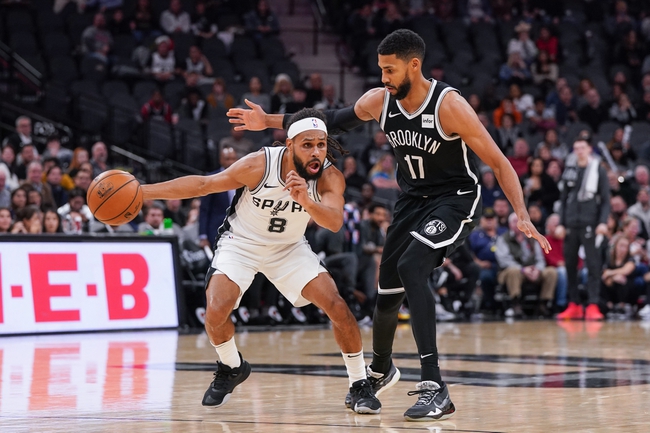 The Brooklyn Nets and the San Antonio Spurs duke it out at the Barclays Center on Friday night.

The San Antonio Spurs have been in a bit of a rut as they’ve lost eight of their last 12 games, but they will be aiming to build some momentum after sneaking past the Hornets in a 104-103 road win on Tuesday. Dejounte Murray led the team with 21 points and six assists on nine of 14 shooting, Bryn Forbes added 15 points while Patty Mills chipped in with 13 points off the bench. As a team, the Spurs shot 47 percent from the field and 11 of 32 from the 3-point line as they started slowly and found themselves in a 17-point deficit, but they took over with their defense in the second and third quarters where they held the Hornets to a combined 40 points before escaping with the narrow win after the Hornets rallied late.

Meanwhile, the Brooklyn Nets have been in a bit of a slump as they’ve lost six of their last eight games and they will be hoping to bounce back after getting routed by the Grizzlies in a 118-79 home loss on Wednesday. Taurean Prince led the team with 15 points, Caris LeVert added 14 points with six assists while Joe Harris chipped in with 13 points and eight rebounds. As a team, the Nets shot just 33 percent from the field and a miserly seven of 42 from the 3-point line as they trailed by just seven points at halftime, before getting dismantled in the second half where they were outscored by 66-34. Spencer Dinwiddie scored just four points on one of nine shooting from the field while Prince and LeVert each shot six of 19 from the field.

The Spurs really haven't been able to build any momentum all season and they certainly don't look close to a recovery with key players like LaMarcus Aldridge dealing with a right shoulder strain. The Nets know a thing or two about injuries to key players and they're dealing with own slump and they're coming into this fresh off a 39-point loss to the Grizzlies. The Spurs are 15-4 ATS in the last 19 meetings in Brooklyn and I think they pull off the upset as the road underdogs here.