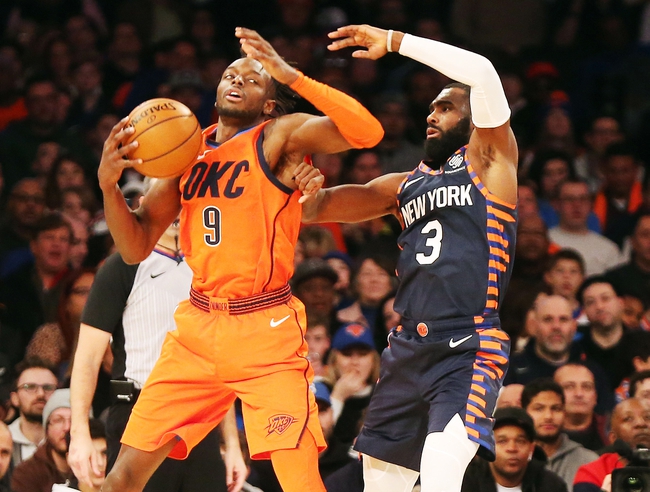 The Oklahoma City Thunder and the New York Knicks do battle at Madison Square Garden on Friday night.

The Oklahoma City Thunder have been in great form lately as they’ve won 15 of their last 20 games and they will be looking to stay hot after taking down the Pistons in a 114-107 road win on Wednesday. Shai Gilgeous-Alexander led the team with 27 points, Dennis Schroder added 23 points and nine assists off the bench while Danilo Gallinari chipped in with 19 points, seven rebounds and four steals. As a team, the Thunder shot a ridiculous 61 percent from the field and 10 of 24 from the 3-point line as they set the tone with 38 points in the first quarter before making another push in the third quarter where they pushed out their lead to 16 points before taking their foot off the gas in the fourth quarter.

Meanwhile, the New York Knicks have been in a rut as they’ve lost seven of their last nine games and they will be looking to bounce back after falling just short to the Jazz in a 112-104 home loss on Wednesday. Julius Randle led the team with 32 points and 11 rebounds, Bobby Portis added 21 points off the bench while RJ Barrett chipped in with 20 points, seven rebounds and nine assists. As a team, the Knicks shot 48 percent from the field and seven of 20 from the 3-point line as they trailed by 10 points at halftime and by as many as 21 points in the third quarter, before the Jazz rested their starters late.

The Thunder have quietly been one of the hottest teams in the league but they will be looking for a better performance after scraping past the lowly Pistons in a close win on Wednesday. The Knicks have been a horror show all season, but they weren't too bad against the Jazz and they're getting bigger games from Randle and Barrett. The Thunder are 5-1 ATS in the last six meetings overall and I think that trend continues here as the Thunder roll.