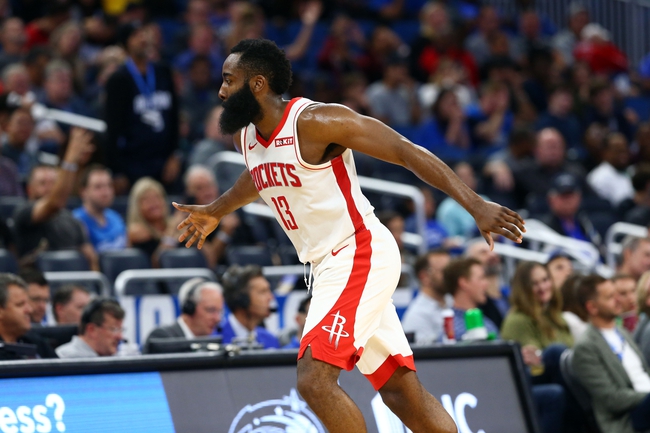 The Orlando Magic and the Houston Rockets do battle at the Toyota Center on Sunday night.

The Orlando Magic have been in decent form as they've won six of their past 10 games and they will be looking to build some momentum after blowing past the Timberwolves in a 132-118 road win on Friday. Nikola Vucevic led the team with 28 points, 12 rebounds and four assists, Markelle Fultz poured in 24 points and five assists on 11 of 14 shooting, DJ Augustin scored 18 points while Michael Carter-Williams chipped in with 17 points. As a team, the Magic shot a sizzling 60 percent from the field and seven of 21 from the 3-point line as they cruised to an easy win after dominating the first three quarters to lead by as many as 23 points in one of their best games of the season.

Meanwhile, the Houston Rockets have been very streak lately as they've won 10 of their last 15 games, but they will be hoping to snap a three-game skid after falling to the lowly Hornets in a 108-99 road loss last night. James Harden led the team with a triple-double of 30 points with 10 rebounds and 14 assists, Robert Covington added 25 points on nine of 16 shooting while Jeff Green chipped in with 20 points, eight rebounds and three steals off the bench. As a team, the Rockets shot 46 percent from the field and 15 of 45 from the 3-point line, but they were always fighting a losing battle after a horror start saw them trail by as many as 20 points before they really found their feet in the game. Russell Westbrook was rested for the game but he is expected to return Sunday.

The Magic have been decent against the lesser competition in the league, but they are just 1-7 ATS in their last eight games against a team above .600. The Rockets were absolutely rolling before three straight losses brought them back down to Earth. The Magic are 7-2 ATS in the last nine meetings in Houston and I think they can earn the cover with the line being so hefty.