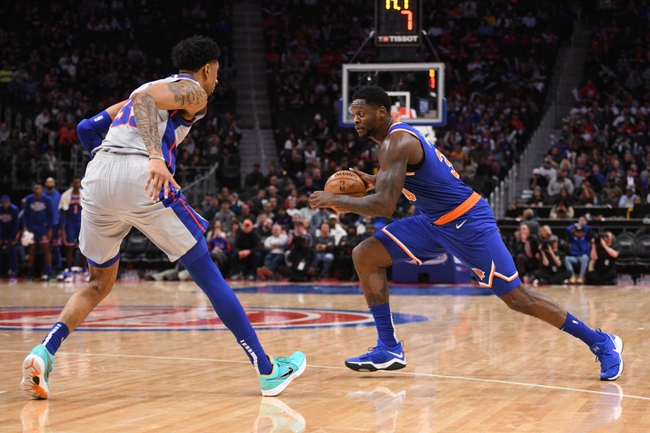 The Detroit Pistons have been in a world of hurt lately as they've lost nine of their last 10 games and they will be hoping to avoid a fourth straight defeat after falling to the Jazz in a 111-105 home loss last night. Christian Wood led the team with 30 points and 11 rebounds on 13 of 24 shooting, Langston Galloway and Jordan McRae each scored 14 points while Brandon Knight chipped in with 13 points. As a team, the Pistons shot 46 percent from the field and nine of 30 from the 3-point line as they looked down and out after trailing by 16 points at halftime, before they rallied in the third quarter to make it interesting late.

Meanwhile, the New York Knicks have been in a nightmare of their own as they've lost eight of their last 10 games and they will be hoping to bounce back after getting routed by the Thunder in a 126-103 home loss on Friday. Elfrid Payton led the team with 18 points, nine rebounds and eight assists, RJ Barrett added 17 points while Bobby Portis chipped in with 14 points and seven rebounds off the bench. As a team, the Knicks shot 45 percent from the field and a miserly four of 24 from the 3-point line as they started slowly with just 20 points in the first quarter and never looked threatening as they were simply outclassed by the red-hot Thunder.

Neither team have much to play for at this stage as the Pistons are just looking for the season to end while the Knicks are just looking for anything to cheer about. The Pistons were surprisingly competitive in their last game and they are 5-1 ATS in their last six road games and 4-0 ATS in the last four meetings in New York. It's hard to pick these games, but there is more to like about the Pistons than the Knicks, so that's where I'm going in this one.