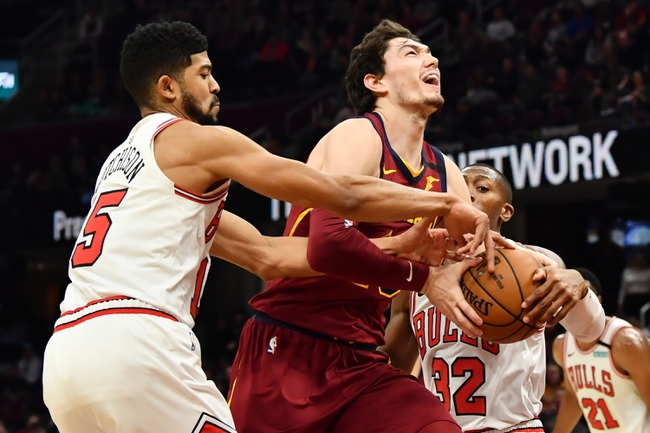 The Cleveland Cavaliers pay a visit to the Chicago Bulls at the United Center on Tuesday night.

The Cleveland Cavaliers have been in decent shape as they've won six of their past 11 games and they will be aiming for a third straight victory after outlasting the Spurs in a 132-129 overtime home win on Sunday. Andre Drummond led the team with 28 points, 17 rebounds and three blocks, Collin Sexton added 26 points and four assists, Cedi Osman scored 19 points with six assists while Kevin Love chipped in with 14 points 18 rebounds and three assists. As a team, the Cavaliers shot 45 percent from the field and 13 of 34 from the 3-point line as they set the tone with 35 points in the first quarter to lead by as many as 17 points, before escaping in overtime where they went on a pivotal 8-2 run behind clutch shots from Sexton, Drummond and Love.

Meanwhile, the Chicago Bulls have been in a serious slump as they've lost 13 of their past 15 games and they will be hoping to avoid a fourth straight defeat after falling just short to the Nets in a 110-107 road loss on Sunday. Otto Porter Jr. led the team with 23 points and four steals off the bench, Coby White scored 21 points with eight assists while Thaddeus Young chipped in with 17 points. As a team, the Bulls shot 42 percent from the field and 12 of 34 from the 3-point line as they fell behind by 13 points before seeing a fourth quarter rally come up short as they cut the deficit to just one with 0.4 seconds remaining, before the Nets escaped on free throws.

The Cavaliers have been playing well lately and they will be feeling pretty confident after edging out the Spurs in overtime on Sunday. The Bulls have been in a real funk lately as they’ve struggled with injuries, but they’re getting some troops back and they didn’t look too bad in their narrow loss to the Nets on Sunday. This should be a close one, but the Cavaliers are 4-1 ATS in the last five meetings in Chicago and I think that trend continues here as the Cavaliers continue their nice form with another win here.