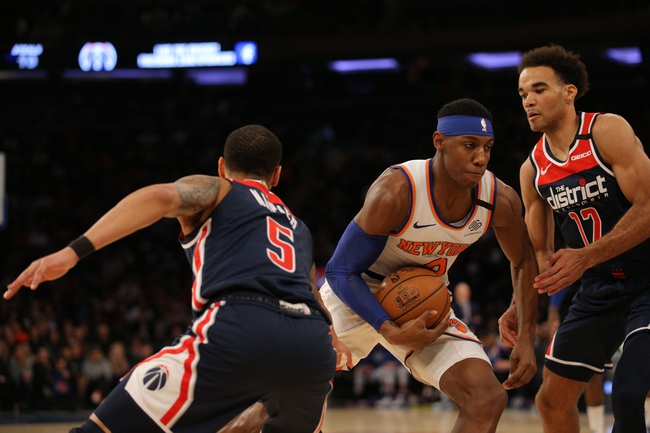 The Washington Wizards play host to the New York Knicks at the Capital One Arena on Tuesday night.

The New York Knicks have been in terrible form lately as they've lost eight of their last 11 games, but they will be looking to build some momentum after taking down the Pistons in a 96-84 home win on Sunday. Julius Randle led the team with 22 points, 12 rebounds and three steals, Elfrid Payton added 16 points with six assists while Mitchell Robinson chipped in with 14 points, 11 rebounds and three blocks off the bench. As a team, the Knicks shot 43 percent from the field and six of 19 from the 3-point line as they wrestled with the Pistons for three tight quarters, before taking over in the fourth quarter where they held the Pistons to just 13 points.

Meanwhile, the Washington Wizards have been in rough shape lately as they've lost seven of their past 10 games and they will be hoping to avoid a second straight defeat after falling to the Heat in a 100-89 home loss on Sunday. Shabazz Napier led the team in scoring with 27 points and seven assists, Davis Bertans added 25 points off the bench while Bradley Beal chipped in with 23 points and six assists. As a team, the Wizards shot just 33 percent from the field and 19 of 47 from the 3-point line as they took it to the Heat with 31 points in the second quarter, before getting outplayed when it mattered most as they were outscored by 28-17 in the fourth quarter.

The Knicks haven't been at their best lately, but they will be feeling good after taking down the Pistons in their last outing, while the Wizards looked great against the Heat before falling flat on their faces in the fourth quarter on Sunday. I wouldn't be surprised at all if the Knicks pull off the upset here, but the Wizards are 11-5 ATS in their last 16 home games and I think they can get the win behind big games from Beal and Bertans in this one.