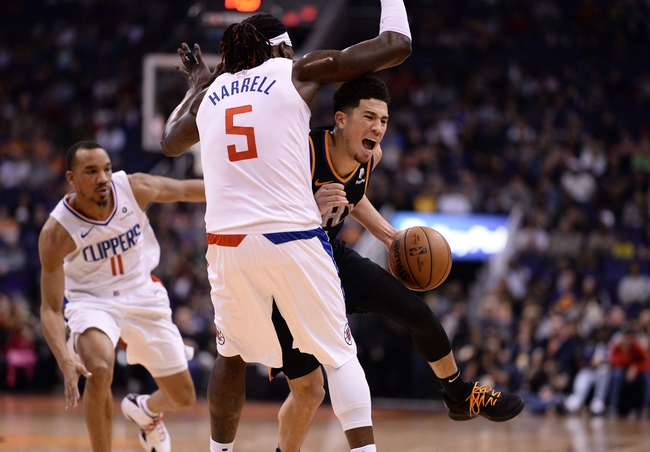 Montrezl Harrell and Devin Booker meet Saturday in the semifinals of the NBA 2K Players Tournament.

Montrezl Harrell and his Portland Trail Blazers beat Derrick Jones Jr. and his Dallas Mavericks, 71-66. This was going to be a Philadelphia 76ers - Milwaukee Bucks matchup, but DJJ backed out and didn’t want to face the Bucks. Harrell simply abused Jones Jr. all night long in the paint, as it was a layup drill for 24 minutes of game time. Harrell didn’t have to make a lot of tough shots, as he got everything he wanted at the rim and killed DJJ in transition as well. Harrell also spent a lot of time talking in the headset, while Jones Jr. was dead quiet, and that seems to be a trend we’re seeing where the louder, more confident player is winning these matchups. Harrell has scored a combined 144 points in his first two matchups.

Devin Booker and his Dallas Mavericks beat Rui Hachimura and the Los Angeles Clippers, 71-55. Booker absolutely dominated the second half on the defensive end and with the deep ball to the point Hachimura considered quitting but realized that probably wouldn’t have made ESPN all that happy. What’s impressive about Booker is that he easily could have taken the easier way out and selected the Lakers to make for a more even matchup rating wise. Booker cruised to an easy victory and still has the Lakers in the tuck for either the semifinals or finals. Booker won his first two games by an average of 13 points and looks like he’s the best player in this remaining field.

This is going to be a very interesting matchup with it being a Kentucky vs. Louisville guy, so I wouldn't be surprised at all if they made a little side bet. The trash talking between these two guys should make for entertaining TV. As for the game itself, Booker has been the better and more consistent player between the two and has been in control of both meetings. Booker defends, he moves the ball well and he knows how to work the shot meter. Harrell has had his moments, but he still allowed DJJ to hang around late in the quarterfinals when that game had no business being that close.

The pick in this article is the opinion of the writer, not a Sports Chat Place site consensus.
Previous Pick
Who Has Made The Most Free Throws In NBA History?
Next Pick
Jeoutai Technology vs. Bank of Taiwan - 4/12/20 SBL Pick, Odds, and Prediction