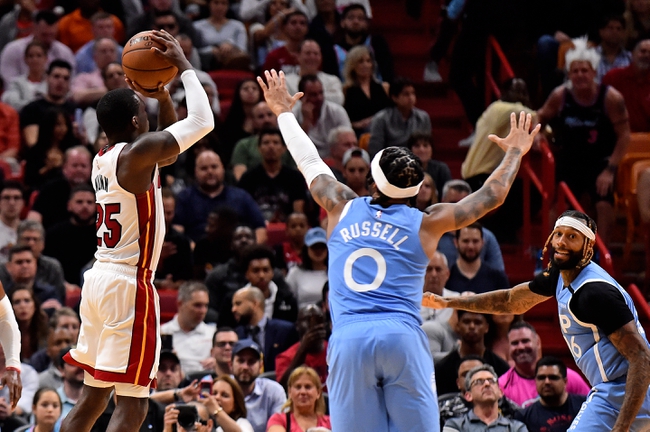 The Minnesota Timberwolves and Miami Heat meet Tuesday in a NBA2K19 simulation matchup.

The Minnesota Timberwolves are a slightly above average team in 2K19 with a 75.6 team average, which made them the 13th best team in terms of rating. Karl-Anthony Towns was the clear star of the team this season with a 91 overall rating, while Andrew Wiggins was ranked 81 overall while Jeff Teague and Dario Saric brought in overall ratings of 79 each. This was a more the decent Timberwolves team that had the inside presence and enough outside shooting to provide balance on the offensive end. While the Timberwolves rarely accomplish much on the court in real life, this was a team you can win with in video game form and probably one of the more underrated teams in the game this season overall.

The Miami Heat lacked a star player in this video game, but they relied on depth and had nine players with an overall rating of at least 76 overall. Hassan Whiteside was the best player on this years Heat team with an 86 overall, while Goran Dragic had an overall rating of 84 and Dwyane Wade was rocking a 79 overall rating. The Miami Heat lacked the outside shooting to be a serious threat in this game, but they have many solid players who play the game the right way and get after it defensively. It may be tough at times to score the basketball with this Heat team, but the production won’t change much when the bench comes in and the physical play defensively can keep them in it most nights.

The Minnesota Timberwolves have more star power in this game and Wiggins is a lot more valuable than he is in the actual game, but they lack the overall depth to be laying big numbers like this. The Miami Heat have the bodies to throw out at the Timberwolves and have the edge when the bench comes in as well. This game should be more competitive than the line suggests due to the depth of the Heats roster. Give me the points.

The pick in this article is the opinion of the writer, not a Sports Chat Place site consensus.
Previous Pick
Pauian Archiland vs. Yulon Luxgen Dinos - 4/14/20 SBL Pick, Odds, and Prediction
Next Pick
Who Has Scored The Most Playoff Points In NBA History?