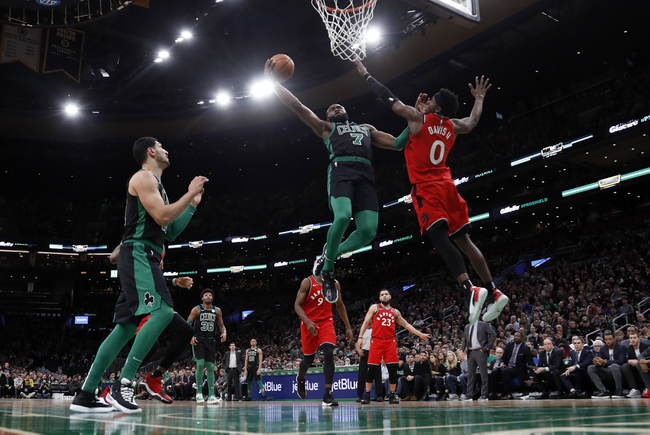 The Toronto Raptors have an 82 overall rating, 83 outside scoring rating, 83 athleticism rating and their 95 intangible rating is comfortably the best in the game. Pascal Siakam is one of the more balanced players in the game with an 89 overall rating, 82 three point shot rating and 80 driving dunk rating. The Raptors are provided with great depth with Kyle Lowry, Fred VanVleet and Serge Ibaka all rated 81 or higher overall. The Raptors also have three knockdown shooters from the outside in Terence Davis, Norman Powell and OG Anunoby. Matt Thomas may be low on the Raptors depth chart, but he has a 92 rated three point shot, easily the best on the team. The Toronto Raptors are talented and deep, but their 57 rebounding rating is one area of weakness on this team.

The Boston Celtics have an overall rating of 82, an outside scoring rating of 86 and a 81 athleticism rating. The Celtics are led by an impressive trio of Jayson Tatum, Kemba Walker and Jalen Brown, who are rated 85 overall or better. What’s even better is Gordon Hayward, Marcus Smart, Daniel Theis and Enes Kanter are all rated 80 overall or better. If you’re not paying attention, the Celtics have seven different players rated at least 80 overall, making them one of the deepest teams in this game. Brad Wanamaker has an 80 rated three point shot and Robert Williams has an 80 driving dunk rating that allows him to create damage in the paint. The Boston Celtics are super talented and super deep, and they’re one of the few teams in this game that doesn’t have a clear weakness.

The Boston Celtics are the better team in this game, as they don't have a clear weakness with all of their ratings either average or above average. The Celtics should be favored, especially at home where the crowd can help teams pull away. Still, the Toronto Raptors have the outside shooting to win any game on any given day and they're going to have the best player in this game in Siakam. The Raptors aren't a team you should be looking to bet against often in the underdog spot.

I'll take my chances with the Raptors and the free points.