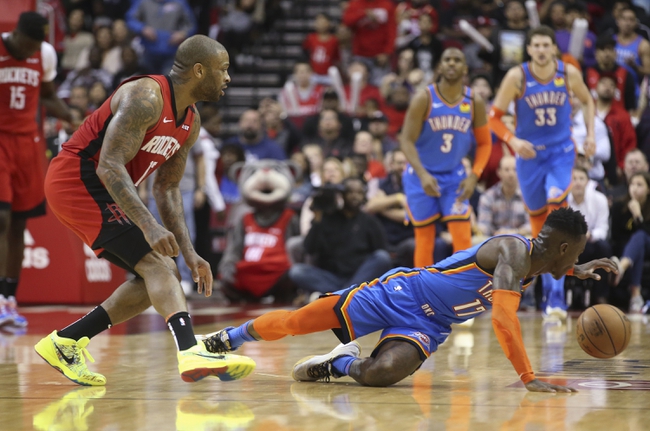 The Oklahoma City Thunder are ranked 81 overall, have a 62 inside scoring rating and a 81 outside scoring rating. The Oklahoma City Thunder are led by their best player in Chris Paul who has a 87 overall rating and a 80 three-point rating. OKC has a lot of depth as well in Shai Gilgeous-Alexander, Steven Adams and Danilo Gallinari, who are all ranked 84 overall and are above-average offensively with their skill sets. Dennis Schroder has an 81 overall rating with an 82 ranked three point shot while Nerlens Noel and Andre Roberson are ranked in the high 70s overall and both solid defensively. The Oklahoma City Thunder may not have a lot of household names, but they’re a deep, talented team that you can do damage with if you’re even decent with the sticks in NBA2K. However, only the Charlotte Hornets have a worse inside scoring rating than OKC, so you have to be nice with the shot meter to have consistent offensive success with the Thunder. Get NBA Picks and NBA Predictions for EVERY GAME at Sports Chat Place.

The Houston Rockets can be a fun team to play with in this game with an 81 overall rating and an 88 athleticism rating, which is the best in the game. James Harden is one of the best players in this game with a 97 overall rating and an 84 rating from beyond the arc. Russell Westbrook carries a respectable 89 rating overall and a 90 driving dunk rating. Robert Covington is a 80 overall and Eric Gordon is a valuable role player with an 80 three point rating. The Houston Rockets can lack depth and can have issues finding easy offense when Harden and Westbrook go to the bench, but the 1-2 punch in their starting lineup makes them dangerous. Defense and rebounding are the Rockets main issues in this game.

I'll lay the reasonable chalk with the Rockets.