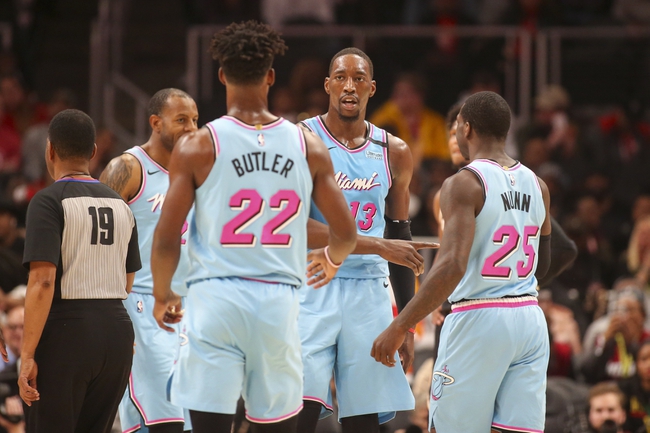 The Miami Heat look to make some noise in th eplayoffs as thee NBA season resumes.

Before the NBA went on a hiatus, the Miami Heat were 41-24 on the season and split their last 12 games overall. The Heat had a lot of questionable losses to below .500 teams, but they were a combined 7-1 against the Toronto Raptors, Philadelphia 76ers and Milwaukee Bucks, and they were one of the top home teams in the league with a 27-5 record. The Heat were also the best three-point shooting team in the league with a 38.3 percent shot from beyond the arc. It’s going to be interesting to see which version of this team we get come August. Get NBA Picks and NBA Predictions for EVERY GAME at Sports Chat Place.

Let’s give a quick breakdown of the Heats remaining schedule and how the break impacts the squad moving forward as we gear up for NBA playoff basketball in Orlando.

Roster Update: The break has helped the Heat more than most teams, as key players Meyers Leonard and Tyler Herro were dealing with injuries that kept them sidelined heading into the break. Herro and Leonard are both healthy now, and there’s actually no listed injury on their current roster. Herro was shooting 39.1 percent from deep in his rookie season, while Leonard added size to a fairly small team, and he shot 52 percent from the field and 42.9 percent from three. I’m also sure a 34-year-old Goran Dragic and a 36-year-old Andre Iguodala welcomed the rest heading into the playoffs. In terms of bodies available, the Heat are probably in the best position of any team heading to Orlando.

Help Or Hurt: On top of getting players back from injury, the break should help the Heat by default. If there’s one team returning that I know will be ready to go from opening tip and won’t have players out of shape, it’s the Heat. While some guys on other teams may have put on a few pounds or are a bit sluggish, we know what Miami’s coaching staff demands of its players and doesn’t allow any slippage. The Miami Heat are known for grueling workouts, measuring body fat and simply being the best conditioned team in the league. Heat players being in elite shape is well documented across the league. Even if guys are stuck in their condos, that work ethic doesn’t leave, so they’ll have a big advantage over most teams returning, at least early on.

Potential Seeding: The Heat currently sit in the fourth seed in the East, and they’re 2.5 games behind the Boston Celtics for the third seed, and they have a two-game lead over the Indiana Pacers and Philadelphia 76ers. The schedule doesn’t do the Heat any favors to improve their position, but one thing we’ve learned from this club is that they get up for the big games and don’t back down from the contenders. The Heat also took the Los Angeles Lakers and Los Angeles Clippers down to the wire at home. The Heat should be able to go at least .500 in their final eight games, likely holding the fourth seed and either playing the Pacers or 76ers in the first round of the NBA playoffs.

Odds: The Heat have odds of +5000 to win the NBA title and +1800 odds to win the East. While I wouldn’t predict the Heat to win the title, their odds of winning the East don’t make much sense. The Heat are healthy for the first time in a while, and they’ve produced a 7-1 record against three of the best teams in the conference. Knowing that and also having the unknown of how these teams are going to respond from such a long layoff, it wouldn’t be surprising to see the Heat win the East or at the very least make the Eastern Conference Finals where you can then make a decision about hedging. The oddsmakers are disrespecting the Heat with these odds to come out of the East and I'll take a stab.

The pick in this article is the opinion of the writer, not a Sports Chat Place site consensus.
Previous Pick
NBA News: Update for 6/15/20
Next Pick
Chunghua Telecom vs. Taipower - 6/16/20 WSBL Basketball Pick, Odds, and Prediction