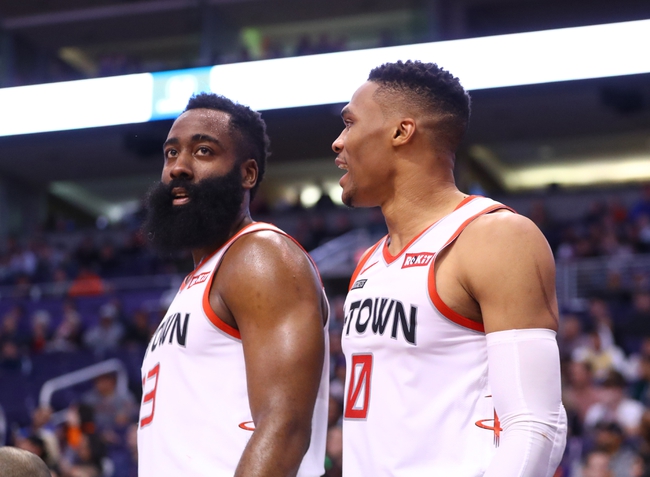 The Houston Rockets entered the NBA hiatus with a 40-24 record, and while they had their ups and downs throughout the year, they showed flashes of being a true title contender. The Rockets were second in the league with an average of 118.1 points per game and their 15.4 made threes is the best in the league. After making moves to be completely small, it’s going to be fun to see if the Rockets can create enough chemistry needed to make a run at the championship. Get NBA Picks and NBA Predictions for EVERY GAME at Sports Chat Place.

Let’s give a quick breakdown of the Rockets remaining schedule and how the break impacts the squad moving forward as we gear up for NBA playoff basketball in Orlando.

Roster Update: The Rockets are one of the few teams in the league that doesn’t have a single player on its injury list. All hands are on deck for the Rockets as we get ready for a wild ride in Orlando. With that said, the break should benefit Russell Westbrook and James Harden in a positive way in terms of being fresh for this run. Westbrook missed 11 games this season and didn’t play much on the end of back to backs in hopes of him keeping his legs fresh. Harden also has a history of playing himself into the ground in the regular season and not exactly being the same guy in the playoffs. A fresh and ready to go Westbrook and Harden duo is downright scary for the other 21 teams in this field.

Help Or Hurt: I think I went over this a bit in the roster update. With no injuries on their roster, I have to think this break helps the Rockets in terms of their top two players being well rested. Harden and Westbrook are two high energy guys that can wear themselves down by taking on a heavy workload in the regular season. With just eight regular season games and then being thrown into the playoffs, things couldn’t set up better for the Rockets. If there was a concern, it would be chemistry, as Robert Covington and Jeff Green played a combined 24 games with the Rockets before the break. Committing to a full small ball team could take time getting used to, and the Rockets have limited reps to make it work before things get real.

Potential Seeding: The Rockets have a 1.5 game lead over the Dallas Mavericks for the sixth seed, and they’re only 2.5 games behind the Denver Nuggets for the third seed. Basically, the Rockets could realistically end up anywhere in the standings from seventh seed to the third seed. The Rockets do have an easier schedule than some of the other teams in the tournament, but you do have to ask yourself how much seeding matters in the West knowing the competition is going to be tough regardless and there’s no home court advantage.

Odds: The Rockets are +650 to win the West and +1200 to win the NBA title. I’ve been on the Rockets bandwagon for many years now and they’ve let me down time and time again. I have questions about how a small ball lineup is going to work in a playoff series when teams make adjustments from game to game, and there’s many playoff teams with dominant size. With that said, the Rockets are a legit dark horse to win the NBA title and I’d like to throw something on these odds. The Rockets are a deadly offensive team and have five shooters on the floor at all times. If Harden and Westbrook are in shape and play the way they’re capable of playing… Watch out.