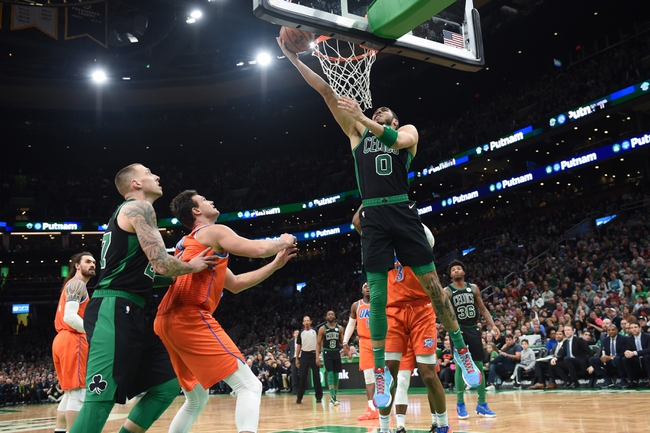 Here’s your daily roundup of all the current NBA news that will affect the 2019-20 season restart and playoffs. Today we’re looking at more information on what the league will look like when the games get going again, so let’s check out all the latest NBA updates. Get Free NBA Picks and NBA Predictions for every game all season long at Sports Chat Place.

NBA Season Restart Safety Protocols - This week, the NBA released its health and safety protocols for the 2019-20 season restart and postseason at Disney World, and suffice to say there’s plenty of information in the over-100-page document. Let’s look at a few specific potential issues and see how the NBA plans on addressing them.

Virus Testing - A big part in maintaining the “bubble” atmosphere in Orlando during the NBA’s plan will be with consistent testing for coronavirus. The idea is to keep the entire area uninfected by closely monitoring players with frequent testing. If a player does test positive for COVID-19, that players will be isolated and retested to assure that no false positive occurred. If the retest confirms the infection, the player will go through a 14-day treatment of rest and recovery. Players will also have to pass cardiac tests before being allowed to return to basketball activities.

There’s not a concrete number placed on how many positive tests the league would have to receive before considering halting the season again, but the NBA did say it was expecting “the occurrence of a small or otherwise expected number of cases” that would “not require a decision to suspend or cancel the resumption” of the restart. The league seems like they’re expecting a few cases here and there, but are leaving themselves some room to maneuver just in case.

Player Participation - The NBA has long maintained that players who don’t wish to participate in the restart don’t have to, and won’t be penalized for missing those games outside of lost salary. That said, if a team determines that a particular player is at a higher risk for suffering extreme effects from coronavirus, that player can be designated as “protected,” will not have to report and will not lose any pay.

The same rules could also be in effect for teams with older coaches, as advanced age is a risk factor in virus severity. A league physician could conceivably determine that a coach’s risk factors are a threat to his health, and we could see some staff being excused there as well.

Arriving in the NBA Bubble - When players initially arrive at Disney World, they’ll have to isolate in hotel rooms for up to 48 hours until they generate two negative coronavirus tests. Players won’t be able to socialize with each other in their hotels, and each team will have its own chef and food room.

It sounds like NBA players will be on one long, strange road trip in Orlando and we’re beginning to get some pictures of what life will look like during that time. We’ll continue to unpack all of it in the daily updates, so stay tuned.

The pick in this article is the opinion of the writer, not a Sports Chat Place site consensus.
Previous Pick
Valencia vs. MoraBanc Andorra - 6/18/20 Spain ACB Basketball Pick, Odds, and Prediction
Next Pick
Which NBA Player had the Most Playoff Turnovers During Their Career?