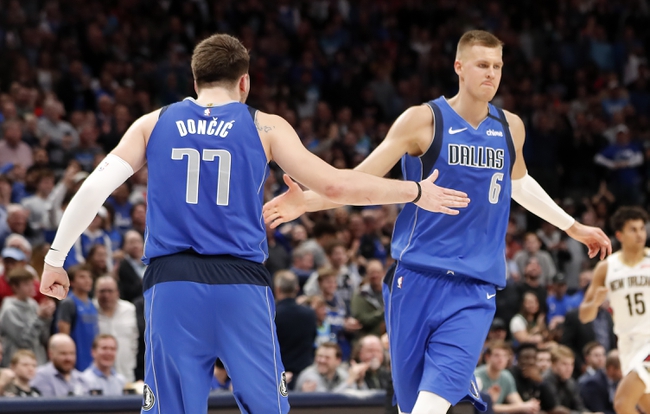 The Dallas Mavericks hope to be a playoff team as the NBA season is set to resumee.

The Dallas Mavericks won eight of their last 13 games before the Coronavirus shut things down, and they currently sit with a solid 40-27 record. The Mavs could be better on the defensive end, but they’re one of the scariest teams on the offensive side. The Mavericks are third in the league with an average of 116.4 points, eighth with a 36.9 three point shooting percentage and fifth in the league with 47 rebounds per contest. Let’s see what we should expect from the Mavericks when the NBA season returns. Get NBA Picks and NBA Predictions for EVERY GAME at Sports Chat Place.

Let’s give a quick breakdown of the Mavericks remaining schedule and how the break impacts the squad moving forward as we gear up for NBA playoff basketball in Orlando.

Roster Update: Outside of Jalen Brunson and Dwight Powell, the Mavericks should have a full roster once August rolls around. Brunson is sidelined after having shoulder surgery and Powell is still recovering from a torn achilles he suffered back in January. Dorian Finney-Smith missed three of the Mavericks final four games with a hip injury, but considering he was day-to-day at the time, he should be good to go now. The Mavericks will have six of their top seven scorers on the court this summer.

Help Or Hurt: Most teams it’s easy to pinpoint what the break is going to do, as they’re either getting guys back from injury or what not, but the Mavericks are one of those clubs that I’m not sure if the break does anything. If there’s one thing to point out, it’s that the hiatus gives Kristaps Porzingis more time to gain confidence in his knee and return to the player we’re used to seeing. Porzingis showed flashes at times this season and was playing very well in March, but he also missed a lot of time and had some games where he just wasn’t feeling it. Players usually are more comfortable as they’re a year or two removed from the injury and this several months off inches Porzingis closer to that time table. Other than that, the Mavs should pretty much be the same team before the break.

Potential Seeding: The Mavericks have a comfortable lead on the seventh seed and are in no danger of falling to the eighth spot. The Mavs should be focused on moving up, as they’re a game and a half behind the Houston Rockets and Oklahoma City Thunder for the sixth and fifth seed. The Mavs are also 2.5 games behind the Utah Jazz for the fourth seed. While home court obviously doesn’t matter this season, I’m sure the Mavericks would love to play anybody but the Los Angeles Clippers in the first round, so I’d expect them to play these final eight games hard and end up with at least the sixth seed.

Odds: The Mavericks are +2000 to win the West and +4000 to win the NBA title. I’m not interested in either of those prices given that the Mavericks lack the depth and the defense to really make a push this season. However, I would be interested in a Mavericks series price if they play say the Denver Nuggets or Utah Jazz in the first round, especially if they’re the underdog as the lower seed. A combination of Porzingis and Luka Doncic is good enough to pull off an upset before they bow out in the second round.

The pick in this article is the opinion of the writer, not a Sports Chat Place site consensus.
Previous Pick
Zhejiang Guangsha vs. Nanjing Tongxi - 6/19/20 CBA Basketball Pick, Odds, and Prediction
Next Pick
Memphis Grizzlies: NBA Restart 2020 Preview, Prediction, Picks