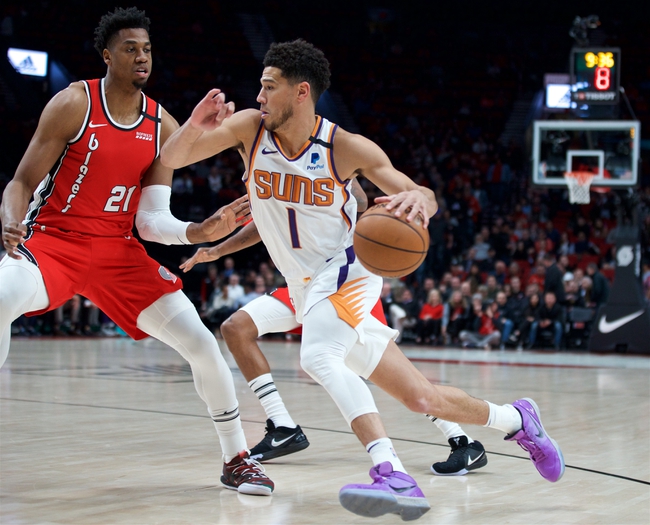 The Phoenix Suns came into the 2019-20 season full of hope and optimism with a young nucleus that is projected to be one of the better teams in the West in the coming years.

However, the fact remains that Phoenix hasn’t made the playoffs this decade, and have watched the win total decline for each of the last five seasons. The Suns entered the pause with a record of 26-39, sitting 13th in the Western Conference, led by DeAndre Ayton who missed the first 25 games of the year with a suspension and Devin Booker. One thing is for sure in this uncertain time we’re in, and that is that the Phoenix Suns have a lot of work to do if they’re going to make up ground and get into the playoffs in Orlando. Get NBA Picks and NBA Predictions for EVERY GAME at Sports Chat Place.

Let’s take a look at the Suns’ schedule and preview what to expect from Phoenix as we prepare playoff basketball in Orlando, Florida in late July.

When it comes to whether or not the break helped or hurt the Suns, I’m of the belief that it helped Phoenix more than it hurt. I don’t think the break had much of an effect, but the fact that it changed the format of how the rest of the regular season unfolds and gives the 9th seed a chance at a play-in game, it gave the Suns an extra chance to sneak into the playoffs. Like a lot of teams, it also gives Phoenix a chance to reset their minds and focus over the last eight game stretch of the season.

Potential Seeding: The Suns are quite a way back in 13th place, but the Suns are also in a logjam, one of five teams that are separated by 2.5 games from 9th to 13th and 9th is 3.5 games within 8th place which would force a playoff after all eight remaining games have been played. Regardless of how you slice it, in the event Phoenix makes it into the playoffs, it would most likely be the Los Angeles Lakers waiting for Phoenix and I just don’t think the Suns are at the level of hanging with the Lakers for a full series.

Odds: The Suns are +50000 to win the NBA championship, one of four teams with the longest odds on the board, as well as +20000 to be the 8th seed in the West and +25000 to be the Western Conference champions. Looking at this realistically, the only bet that would be worth placing is the Suns to finish with the 8th seed, but for me even that’s a stretch as I just don’t see the Suns leapfrogging enough teams to quality for the postseason so for me, it’s a pass on the Suns until next year.

The pick in this article is the opinion of the writer, not a Sports Chat Place site consensus.
Previous Pick
Toronto Raptors: NBA Restart 2020 Preview, Prediction, Picks
Next Pick
NBA News: Update for 6/23/20