Who Has the Most Blocks in an NBA Season? 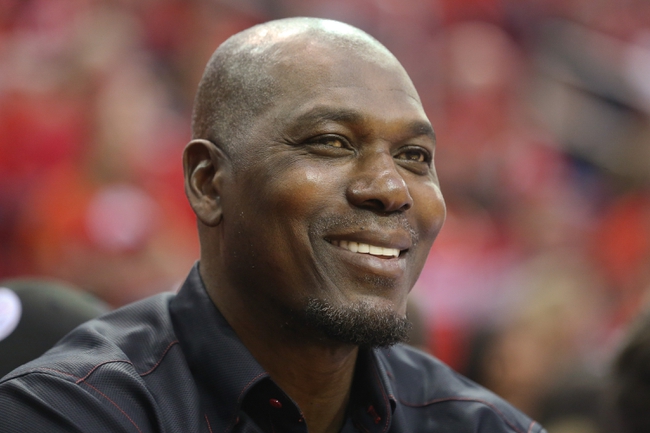 The NBA Players with the Most Blocks in a Season

These are the top ten NBA players with the most blocks in a season.

Since the block was added as an official NBA statistic in 1973, we’ve seen plenty of talented players dominate on defense. A key block at an important moment can elevate an entire team to get the victory, and over the years some guys have turned it into an art form. Check back all season long for free NBA picks and NBA predictions at Sports Chat Place.

1. Mark Eaton, 456 (1984-85) - Though he wasn’t much of an offensive force with only 6.0 PPG during his career, Eaton was one of the best NBA defenders of all time. Over his career, Eaton averaged 3.5 blocks per game, and collected a total of 3,064. Compare that to his 5,216 career points and you’ll get an idea of how important blocks were to Eaton’s game. We’ll visit with him some more a little further down our season blocks list.

2. Manute Bol, 397 (1985-86) - Bol was one of the most widely-beloved NBA figures during his playing days, thanks mostly to his shot-blocking abilities. He was the only NBA player to retire with more career blocked shots than points scored: 2,086 blocks versus 1,599 points. Bol was also a solid rebounder, tallying 2,647 in an NBA career that stretched from 1985 to 1995.

4. Hakeem Olajuwon, 376 (1989-90) - Another legendary NBA player with a cool nickname, Hakeem “The Dream” Olajuwon did pretty much everything there is to do on a basketball court. Over his career, Olajuwon collected 3,830 blocks with 13,747 rebounds and 26,946 points. He spent nearly his entire college and pro career with Houston (the Cougars and Rockets) outside of one year in Toronto at the end of his playing days.

6. Manute Bol, 345 (1988-89) - Bol has a second entry on our blocks list as well, bagging 345 blocks in his first season with the Golden State Warriors. Over the course of his 10-year NBA career, Bol played for the Bullets, Warriors, 76ers and Heat. He was a two-time NBA blocks leader and made the NBA All-Defensive Second Team in 1986.

8. Hakeem Olajuwon, 342 (1992-93) - Olajuwon had another great blocks season in 1992-93, which was just one year before he won his first of back-to-back NBA championships with Houston. The Hall-of-Fame Olajuwon’s list of NBA accomplishments is nearly endless. He was an MVP in 1994, a two-time NBA Finals MVP, a 12-time All-Star, a two-time defensive player of the year and a three-time blocks leader. Olajuwon’s number (34) is retired by both the Cougars and Rockets.

9. Kareem Abdul-Jabbar, 338 (1975-76) - Abdul-Jabbar retired from NBA playing way back in 1989, but he’s still a household name. Though he played his first four seasons in Milwaukee, Abdul-Jabbar is best remembered as a member of the Lakers’ championship teams in the 1980s. Among his myriad career accomplishments are six NBA titles, 19 All-Star selections, two NBA Finals MVP awards and a Rookie of the Year award in 1970. Abdul-Jabbar was even awarded the Presidential Medal of Freedom in 2016.

10. Dikembe Mutombo, 336 (1993-94) - Mutombo is widely beloved by basketball fans the world over, and he was a joy to watch on the court. He entered the league in 1991, and by the time his playing days had wrapped up in 2009, Mutombo had amassed a great collection of accolades. He was an eight-time All-Star, a four-time NBA Defensive Player of the Year, a three-time blocks leader and a two-time rebounding leader. Mutombo’s number (55) was retired by Atlanta and Denver.