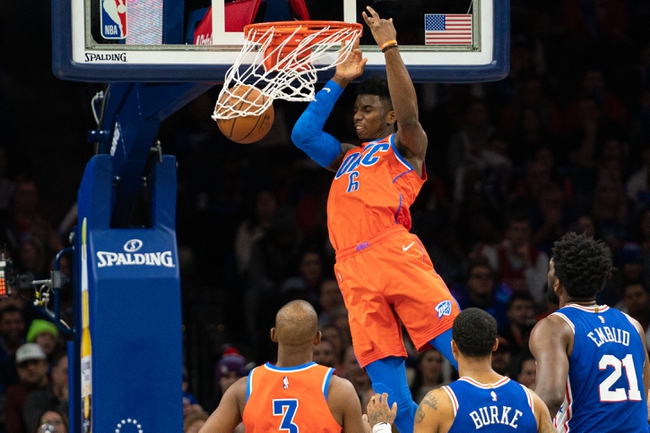 The Philadelphia 76ers and the Oklahoma City Thunder meet in an NBA preseason matchup from the HP Field House on Sunday afternoon.

The Philadelphia 76ers will look to build off of a 90-83 win over the Memphis Grizzlies in their opening scrimmage on Friday night. The Sixers got off to a flying start, more than doubling up the Grizz in the first quarter, leading 25-12 after the first quarter and going up 54-28 at the half after a 29-16 second period. Memphis cut into the lead by outscoring the Sixers by 16 in the 3rd, but the Sixers would hold on for the win despite losing the 4th 21-18. Tobias Harris led the 76ers with 15 points on 6 of 11 shooting with 10 rebounds for the double-double while Joel Embiid added 10 points as the only other double-digit scorer for Philly in the win. Ben Simmons also added 9 points to match his team-high 9 assists as well in the victory.

The Oklahoma City Thunder on the other hand will try to build off of a 98-84 win over Boston in their last outing. OKC jumped out to a four point lead after one and ended up winning all four quarters, growing their lead at the end of every period, culminating in a 14-point win at the final horn. Shai Gilgeous-Alexander and  Steven Adams led the Thunder with 17 points, with Adams doing his work on 8 of 11 shooting with a team-high 7 rebounds while Gilgeous-Alexander shot 6 of 11. Abdel Nader added 11 points to round out the trio of double-digit scorers for OKC in the winning effort. Chris Paul also added a team-high 5 assists in just over 18 minutes on the floor.

The Sixers showed they can play together and looked pretty good in the win over Memphis. However, I’m still a bit worried about Philadelphia’s depth behind the trio of Harris, Simmons and Embiid. Oklahoma City on the other hand, made me eat my words against Boston as the Thunder came out and did what they’ve done all year and that’s defy the odds and take teams down that are standing in their way. I’m back to being a believer in the Thunder so I’ll back OKC in this one.