The Boston Celtics and the Miami Heat do battle at the ESPN Wide World of Sports Complex on Tuesday night.

The Boston Celtics will be looking to stay hot after taking down the Trailblazers in a 128-124 thriller on Sunday. Jayson Tatum led the team with 34 points and eight assists, Jaylen Brown added 30 points on 10 of 18 shooting while Gordon Hayward chipped in with 22 points and eight rebounds. As a team, the Celtics shot a healthy 54 percent from the field and 18 of 30 from the 3-point line as they escaped with the narrow win behind big plays from Hayward and Brown after blowing a 24-point first half lead.

Meanwhile, the Miami Heat were feeling good after they blew out the Nuggets on Saturday, but now they will be hoping to bounce back after falling short to the Raptors in a 107-103 loss on Monday. Goran Dragic led the team with 25 points and five assists off the bench, Kelly Olynyk added 17 points while Jimmy Butler and Jae Crowder each scored 16 points. As a team, the Heat shot just 42 percent from the field and 14 of 45 from the 3-point line as they struggled in the early going, managing just 17 points in the first quarter, before seeing a late rally fall short as they scored just seven points in the final 4:35. Kendrick Nunn scored just two points on zero of seven shooting while Duncan Robinson scored just three points in 22 minutes of action.

This is a big game as there is plenty on the line in terms of playoff seeding, especially for the Heat who could drop down the standings with a couple more losses. These two squads have met twice this season with the Celtics winning both meetings, but even though the Heat need this win badly, I can't go past the Celtics with the short line. 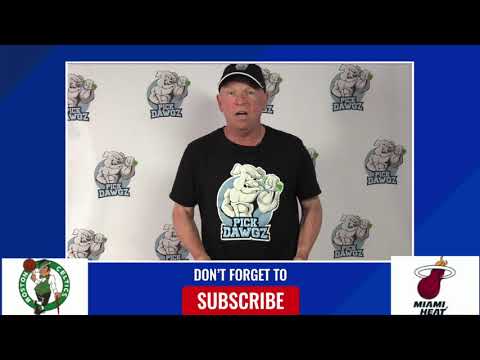