The Los Angeles Clippers play host to the Brooklyn Nets at the ESPN Wide World of Sports Complex on Sunday night.

The Brooklyn Nets have been playing surprisingly well lately as they’ve won three of their last four games and they will be aiming to stay hot after taking down the Kings in a 119-106 win on Friday. Caris LeVert led the team with 22 points and seven assists, Joe Harris added 21 points while Jarrett Allen chipped in with 21 points on eight of 11 shooting. As a team, the Nets shot 48 percent from the field and 17 of 40 from the 3-point line as they took control of the game with a 13-4 run to take a lead that they would hold right till the end as the stumbling Kings never really threatened.

Meanwhile, the Los Angeles Clippers have been in decent shape as they’ve won three of their last four games and they will be looking to keep that momentum going after last night’s 122-117 win over the Trailblazers. Paul George led the team with 21 points and four assists, Landry Shamet added 19 points, Reggie Jackson scored 17 points with five assists while Marcus Morris Sr. chipped in with 15 points. As a team, the Clippers shot 49 percent from the field and 15 of 34 from the 3-point line as they hung with the Trailblazers in a high-scoring first half, before they were able to turn things around with their defense by holding the Trailblazers to just 42 points in the second half.

Jarrett Allen is doubtful for Sunday with a sprained left ankle, Joe Harris is doubtful with a groin injury, while Caris LeVert is likely to rest Sunday, so the Nets will once again be severely shorthanded. The Clippers have their own injuries as they are likely without Patrick Beverley again while Kawhi Leonard is currently listed as day-to-day. With that being said, I expect the Nets to hang in the contest with a makeshift lineup, but in the end I have the Clippers winning this one easily. 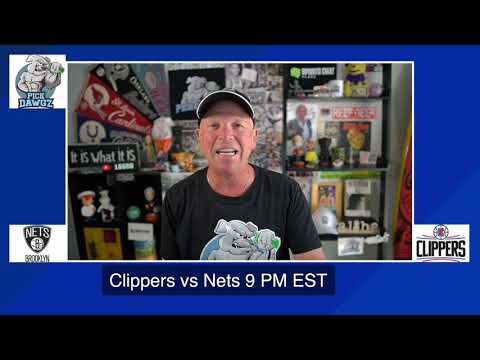