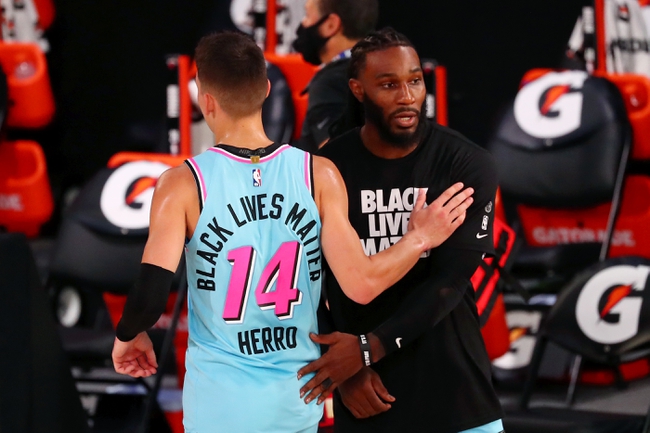 The Miami Heat and the Indiana Pacers duke it out at the ESPN Wide World of Sports Complex on Friday afternoon.

The Miami Heat haven’t been at their best lately as they’ve lost three of their last four games and they will be hoping to bounce back after falling to the Thunder in a disappointing 116-115 loss on Wednesday. Tyler Herro led the team with 30 points off the bench, Duncan Robinson added 19 points in just 16 minutes of action while Goran Dragic chipped in with 16 points and six assists. As a team, the Heat shot 48 percent from the field and 14 of 42 from the 3-point line as they dominated the Thunder to lead by as many as 22 points early in the fourth quarter, before watching their hard work go down the drain as the Thunder rallied to steal the game in the final seconds.

Meanwhile, the Indiana Pacers have won five of their seven games in the bubble and they will be looking to stay hot after outlasting the Rockets in a 108-104 win on Wednesday. Justin Holiday and Myles Turner scored 18 points apiece, Edmond Sumner added 17 points and four assists off the bench while Victor Oladipo and Doug McDermott scored 16 points apiece. As a team, the Pacers shot just 40 percent from the field and 11 of 31 from the 3-point line, but they won this one with defense as they held the Rockets to just 17 points in the second quarter, before holding them to just two points in the final 2:21 of the fourth quarter to allow them to escape with the win.

These two teams are already locked into the playoffs, so this game will serve as little more than a scrimmage between the reserves. I'm tempted to go with the Heat's bench who will be keen for a better showing after blowing the last game on Wednesday, but I'm sticking with the more consistent Pacers in this one.