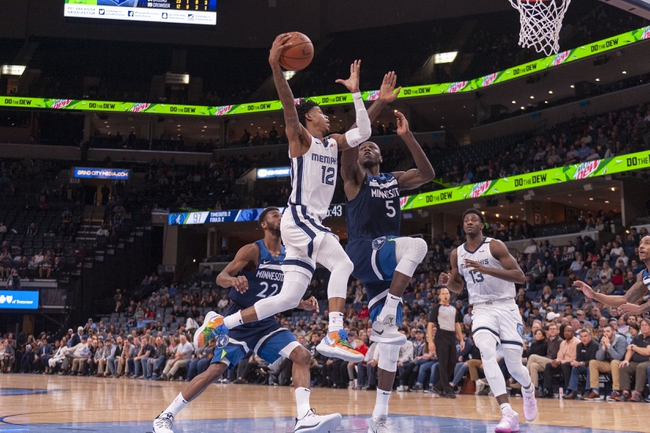 The Memphis Grizzlies and Minnesota Timberwolves meet Saturday in preseason NBA action at the Target Center.

The Memphis Grizzlies finished 2-6 in the bubble the last time we saw them, and they now hope to take another step forward in this rebuild. The issue is the Grizzlies are a banged up team, as Jaren Jackson Jr., Tyrus Jones, Justise Winslow and Jontay Porter are all out indefinitely with injuries. Star point guard Ja Morant was also playing in the bubble with a dislocated thumb. Other than that, the Grizzlies should be intrigued to see if Dillon Brooks, Brandon Clarke and Grayson Allen take the next step in their careers. We’ll also get our first look at draft selection Desmond Bane out of TCU. The Grizzlies are a clear team on the rise, but they must get healthy first to reach their full potential.

The Minnesota Timberwolves haven’t played since March 10 and they’ve lost 20 of their last 24 games overall. The Timberwolves have potential with a starting five that includes Ricky Rubio, D'Angelo Russell and Karl-Anthony Towns. However, Towns has been dealing with a thumb injury and he’s also lost several family members due to COVID-19, so he’s not there mentally and it wouldn’t be surprising to see him away from the team for a while. This will be our first look at first overall pick Anthony Edwards, and Minnesota can only hope he can be the face of this program for years to come. The Timberwolves also have a trio of young players in Jarrett Culver, Naz Reid and Jarrett Culver who need to take this time to prove they’re worthy of rotation minutes. There’s potential with the Minnesota Timberwolves, it just needs to come together.

The Memphis Grizzlies have a lot of injuries entering the preseason and I do question if there's a bit of a hangover from their struggles in the bubble. The Minnesota Timberwolves have to figure out of their star player in Towns is in a good enough mental space to compete, but this is still a decent roster overall and should be ready to start putting things together. I'm not saying the Timberwolves will be a playoff team, but they'll be better this season.

Give me Minny in this near toss up.