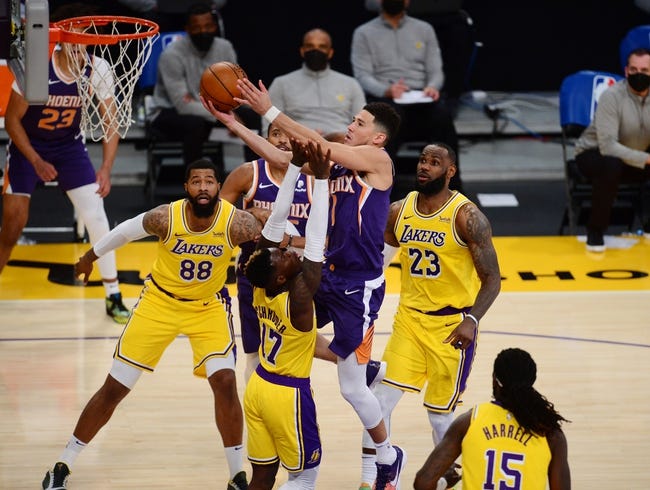 The Golden State Warriors and the Phoenix Suns collide at the PHX Arena on Thursday night.

The Golden State Warriors have been in a bit of a rut as they’ve lost four of their last seven games and they will be hoping to avoid a third straight defeat after last night’s 108-106 road loss to the Trailblazers. Stephen Curry led the team with 35 points and five assists, Andrew Wiggins added 14 points while Kent Bazemore chipped in with 12 points. As a team, the Warriors shot just 42 percent from the field and 15 of 42 from the 3-point line as they looked to be in control after leading by six points late in the fourth quarter, until the final 1:42 where they went scoreless.

Meanwhile, the Phoenix Suns have been in terrific form lately as they’ve won 12 of their past 14 games and they will be gunning for a fourth straight victory after taking down the Lakers in a 114-104 road win on Tuesday. Dario Saric led the team in scoring with 21 points off the bench, Mikal Bridges added 19 points with five assists, while DeAndre Ayton and Devin Booker each scored 17 points. As a team, the Suns shot 49 percent from the field and 16 of 29 from the 3-point line as they led for most of the game, before pulling away in the fourth quarter after seeing their best player in Booker get ejected in the third quarter.

Head to head, the under is 7-0 in the last seven meetings overall and the Warriors are 6-2 ATS in the last eight meetings in Phoenix.

The Warriors just haven’t been able to get out of their funk lately and they will be disappointed after dropping a game they should’ve won last night, while the Suns have been in great form and they are coming into this one with plenty of momentum after taking down the Lakers on Tuesday. This should be a close one, but I’m sticking with the Suns to stay hot here and claim another win.