The San Antonio Spurs travel to the Ball Arena to do battle with the Denver Nuggets on Wednesday night.

The San Antonio Spurs have been in a real funk lately as they’ve lost eight of their past 10 games and they will be hoping to put a halt to a three-game skid after getting routed by the slumping Cavaliers in a 125-101 home loss on Monday. DeMar DeRozan led the team in scoring with 20 points while Keldon Johnson, Derrick White and Rudy Gay each scored 13 points, but no other player finished in double figures in scoring. As a team, the Spurs shot just 42 percent from the field and five of 26 from the 3-point line as they fell behind by 10 points at halftime, before the flood gates opened in the third quarter where the Cavaliers exploded for 43 points to make it a blowout.

Meanwhile, the Denver Nuggets have been on a tear lately as they’ve won 14 of their past 17 games and they will be looking to build on their current five-game win streak after taking down the Magic in a 119-109 home win on Sunday. Aaron Gordon led the team with 24 points on 10 of 13 shooting, Jamal Murray added 22 points, Michael Porter Jr. scored 20 points with 12 rebounds while Nikola Jokic racked up 17 points with nine rebounds and 16 assists. As a team, the Nuggets shot 48 percent from the field and nine of 29 from the 3-point line as they struggled to get going and trailed by as many as 18 points, before outscoring the Magic by 72-44 in the second half to win easily in the end.

Head to head, the over is 4-1 in the last five meetings overall and the Spurs are 17-8 ATS in the last 25 meetings in Denver.

The Spurs are coming into this game ice-cold as they’ve won just two of their past 10 games and their confidence took a real hit after getting blown out by the struggling Cavaliers on Monday. The Nuggets have gone from strength to strength this season as they’re coming into this one riding a five-game win streak and it’ll be a shock to me if their streak ends against the stumbling Spurs. This should be close for a while, but in the end I have the Nuggets pulling away for the win and cover as the Spurs lose their fourth straight. 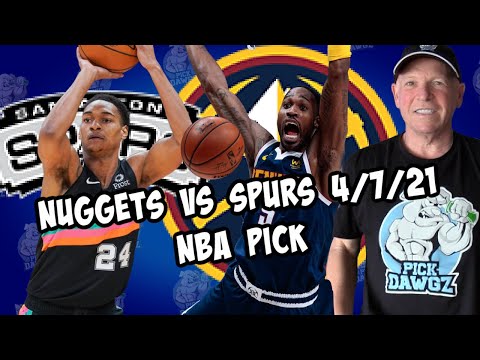