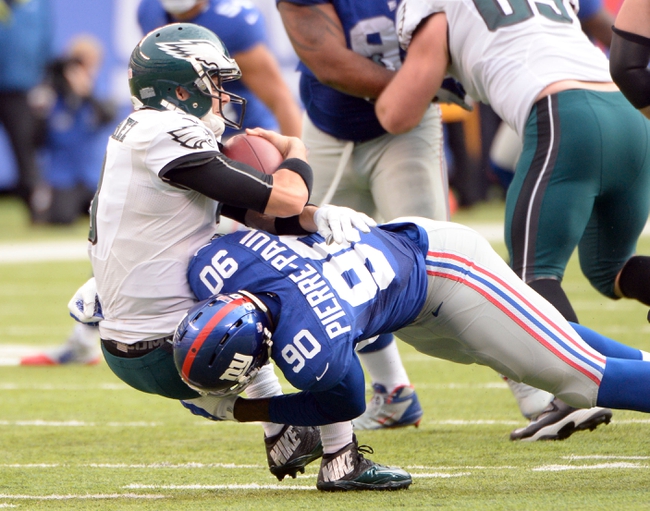 We’ve passed through another off-season NFL weekend and into the workweek, and there’s plenty of fresh news to check out as we move along. That said, let’s visit the headlines in our daily wrap-up and see what’s happening out there.

The Giants have quite the soap opera going on right now with DE Jason Pierre-Paul. The latest chapter in the story has him expected to skip out on this month’s mandatory minicamp (which begins today, incidentally) as part of his holdout in seeking a long-term contract extension.
New York designated Pierre-Paul with the franchise tag this off-season, and he hasn’t yet signed the tender. The deal is worth $15 million.
This situation is certainly odd, as Pierre-Paul faces little repercussion for not attending minicamp. He’s technically not on the roster right now, so he can’t be fined by the team for his absence.
The two sides are reportedly not very close on agreeing to a long-term contract extension, so we could see this story play out for quite some time to come. Even though Pierre-Paul is coming off a great 77-tackle, 12.5-sack season in 2014, he’s getting a new defensive coordinator this year and will need to learn as much as he can before Week 1.

The Falcons made a roster move yesterday, releasing veteran OT Sam Baker. He was a first-round pick in 2008 and has been in Atlanta for his entire career.
Baker missed out on the 2014 season due to a torn patellar tendon and was replaced by Jake Matthews.

Let’s finish up today with a couple of Chargers items. First of all, safety Eric Weddle is expected to participate in the team’s minicamp this week. He had been holding out thanks to a contract dispute.
Weddle will likely hit the free agent market after the 2015 season.
Also, the team will be looking to RB Danny Woodhead to provide a spark on the offensive side of the ball this year. Woodhead is finally healthy after suffering a broken ankle in Week 3 of the 2014 season and will look to get back to his 2013 numbers this year. He’ll be a player for Chargers fans to keep a close eye on.

The pick in this article is the opinion of the writer, not a Sports Chat Place site consensus.
Previous Pick
NFL News: Player News and Updates for 6/14/15
Next Pick
Top Ten Worst First Round NFL Draft Picks of the 2000s