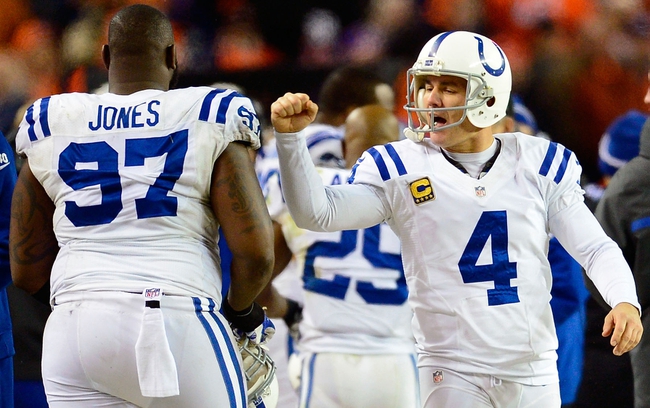 Which DII Players Have Made It in the NFL?

There are a lot of players in the NFL who wind-up getting overlooked in the media because they aren’t JJ Watt or Rob Gronkowski or Andrew Luck (you get the picture). You might be surprised, though, by how many of today’s players didn’t play in the SEC, the Big Ten, or the PAC 12. Today, we’re going to take a look at the top ten Division II players who are currently playing professional football.

1. Indianapolis Colts K Adam Vinatieri played his college ball at South Dakota. Vinatieri, if you’ve been living under a rock, went onto become (probably) the best kicker the NFL has ever seen, logging a long stint with the New England Patriots (winning 3 Super Bowls all by himself) before moving to Indy.

2. Tennessee Titans WR Nate Washington played for Ohio’s Tiffin University during his college years. Washington set multiple records that still stand at the school before being signed by the Pittsburgh Steelers in 2005, launching his professional career.

3. WR Jacoby Jones, who was cut by the Baltimore Ravens and almost immediately signed by the San Diego Chargers this offseason, played for tiny Lane College in Tennessee. Jones was initially drafted by the Houston Texans in 2007 and he has proven to be an incredibly good value for a 3rd round selection.

4. Tampa Bay Buccaneers WR Vincent Jackson, who was originally drafted by the San Diego Chargers in 2005, played for Northern Colorado (a DII school during his time there) in college. Jackson has gone onto play in 3 Pro Bowls.

5. New Orleans Saints G Jahri Evans played for Bloomsburg University of Pennsylvania in college. Evans was selected by the Saints in the 4th round of the 2006 draft and has spent his entire career with the team. After the squad’s 2010 Super Bowl win, Evans was made the highest paid guard in the league at that time.

6. CB Brandon Carr, who played for Grand Valley State in college, is about to enter his fourth NFL season with the Dallas Cowboys after spending 4 years with the Kansas City Chiefs. Carr isn’t as good as he once was, but he’s still more than deserving of a spot on today’s list.

7. Miami Dolphins CB Brent Grimes played his college ball at Shippensburg University of Pennsylvania (known for their football program, obviously). Grimes was named to 2 Pro Bowls during his 6 years with the Atlanta Falcons and signed a new 4-year contract with the Fins in 2014.

8. RB Joique Bell, who was originally signed by the Philadelphia Eagles, but has only actually played for the Detroit Lions spent his college years at Michigan’s Wayne State. Bell has gone onto become a solid NFL player, though he is currently struggling with an Achilles injury that may keep him out of 2015 training camp.

9. San Diego Chargers RB Danny Woodhead (who is looking to make waves now that he’s healthy) played ball at Chadron State before being signed by the New York Jets in 2008. Woodhead has had a successful NFL career so far.

10. T Todd Herremans, who spent a long time with the Philadelphia Eagles before signing with the Indianapolis Colts this offseason, played his college ball at Saginaw Valley. Herremans is a solid player (I’m definitely a fan) and I’m excited to see what he does in Naptown this year.

The pick in this article is the opinion of the writer, not a Sports Chat Place site consensus.
Previous Pick
Top Ten Worst First Round NFL Draft Picks of the 2000s
Next Pick
Top Ten Longest NFL Kickoff Returns of 2014