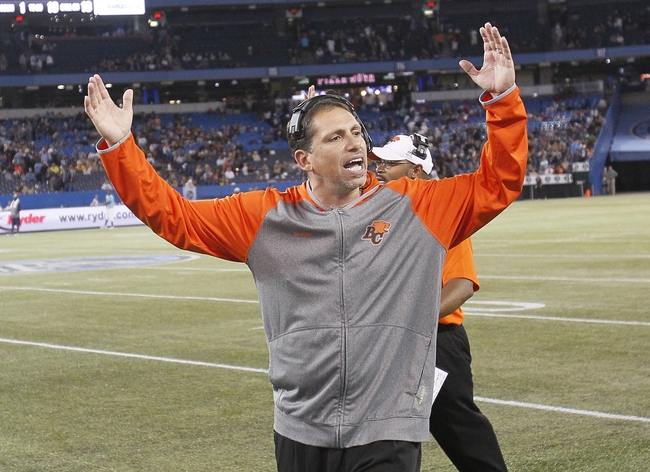 The Saskatchewan Roughriders and BC Lions meet late Friday night at the BC Place.

The Saskatchewan Roughriders need a win after getting off to a rocky 0-2 start. Kevin Glenn is completing 79.3 percent of his passes for 597 yards, two touchdowns and two interceptions. Glenn is coming off a two-touchdown game, as he replaces the injured Darian Durant. Ryan Smith and Chris Getzlaf have combined for more than 300 yards and three touchdowns, while Jerome Messam has 108 receiving yards on nine receptions. The Roughriders are averaging 161 rushing yards per game, and Messam leads the way with 159 yards on 23 carries. Defensively, the Saskatchewan Roughriders are allowing 36 points and 418.5 yards per game. Telvion Clark leads the Roughriders with 10 tackles, Macho Harris has two sacks and Jake Doughty has the team’s only interception. Shea Emry is questionable with a neck injury.

The BC Lions also look for their first win as they play at home for the first time. Travis Lulay is completing 56.3 percent of his passes for 254 yards, one touchdown and one interception. Lulay has to be better if the Lions are going to take that next step. Emmanuel Arceneaux and Austin Collie have combined for close to 200 yards and a touchdown, while Shawn Gore has 29 yards on one reception. The Lions ground game is averaging 60 yards per game, and Andrew Harris leads the way with 48 yards on 13 carries. Defensively, the BC Lions are allowing 27 points and 437 yards. Adam Bighill leads BC with eight tackles, Solomon Elimimian has an interception and Khreem Smith has a sack. Steven Clarke and Cody Husband are questionable.

Both teams need a win to avoid this season possibly really getting out of hand early. I expect a better performance from Lulay, and considering the Roughriders have stunk up the joint twice, I have to go with BC at home and the small chalk.

The pick in this article is the opinion of the writer, not a Sports Chat Place site consensus.
Previous Pick
Montreal Alouettes vs. Winnipeg Blue Bombers CFL Pick, Odds, Prediction - 7/10/15
Next Pick
Top Ten Lowest Scoring First Half NFL Teams in 2014