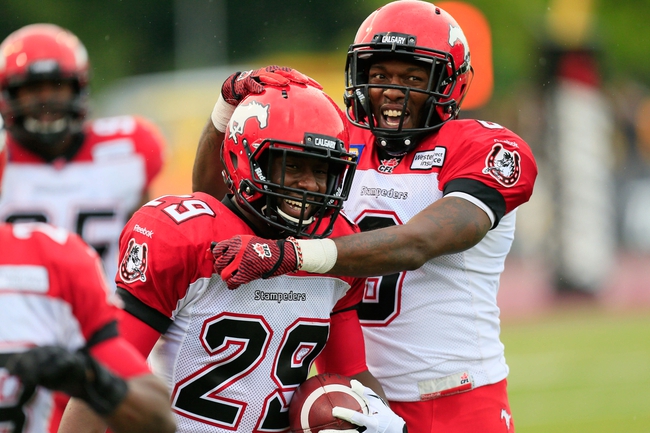 The Toronto Argonauts and Calgary Stampeders meet Monday night at the McMahon Stadium.

The Toronto Argonauts look to get another big win and build on their 2-0 start. Trevor Harris is completing 83.1 percent of his passes for 614 yards, seven touchdowns and one interception. Harris is coming off a four-touchdown game and making fans forget about Ricky Ray. Chad Owens and Brandon Whitaker have combined for close to 300 receiving yards and three touchdowns, while Kevin Elliott has a touchdown on five catches. The Argonauts ground game is averaging 118.5 yards per game, and Whitaker leads the way with 186 yards on 22 carries. Defensively, the Toronto Argonauts are allowing 25.5 points and 423 yards per game. Gregory Jones has 11 tackles, while Euclid Cummings and Cleyon Laing have combined for four sacks. Branndon Braxton is questionable.

The Calgary Stampeders look to get a game above .500 and remain unbeaten at home. Bo Levi Mitchell is completing 62.1 percent of his passes for 507 yards, one touchdown and three interceptions. Mitchell has to be a difference maker in order for Calgary to get rolling. Jeff Fuller and Marquay McDaniel have combined for more than 250 receiving yards, while Eric Rogers has a touchdown on seven receptions. The Stampeders ground game is averaging 263 yards per game, and Jon Cornish leads the way with 129 yards on 25 carries. Defensively, the Calgary Stampeders are allowing 26 points and 357.5 yards per game. Buddy Jackson leads Calgary with 12 tackles, Charleston Hughes has two sacks and Keon Raymond has the team’s lone interception. Kamar Jorden and Karl Lavoie are questionable.

This has to be the game where Mitchell has a breakout game, right? Either way, both offenses have shown the ability to put up a decent amount of points. Instead of playing with the spread, I like the over in this matchup.

The pick in this article is the opinion of the writer, not a Sports Chat Place site consensus.
Previous Pick
Top Ten Lowest Scoring First Half NFL Teams in 2014
Next Pick
Top Ten Funniest Names in the NFL (Past & Present)