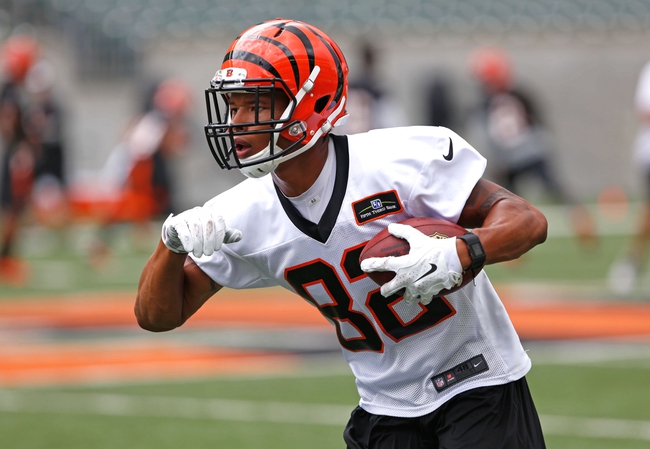 We’re getting closer and closer to training camp season in the NFL with each passing day. While we’re waiting, let’s check out some of the notable players and situations out there in the league.

Cincinnati receiver Marvin Jones is reportedly over his foot injury, the same issue that had him sitting out all of last year.
Jones was able to participate in the team’s minicamp last month and is heading into 2015 healthy.

More bad news for the oft-injured Dennis Pitta. It’s looking like he’ll begin the season on the team’s PUP list, which means he’ll be out for at least the first six games. That said, he may never even play in the NFL again.
Pitta is trying to come back from a second fractured/dislocated hip injury and hasn’t yet been medically cleared for full practice.
The good news is that Pitta has been able to do some individual work and run some routes, but he’s still got a long way to go. If and when he’s cleared to return to the NFL, he’ll have to first assess the risk involved and decide if he wants to return to the field. Regardless, it looks like it’ll be a little while before we know what’s going on.

The Rams Todd Gurley is reportedly going to be placed on the Non-Football Injury list. He’s coming off an ACL issue in his left knee.
It had initially been reported that Gurley would be ready for training camp, but if he’s not, this move gives the team the ability to pull him off the list at any time and place him on the active roster. It’ll be a situation to watch for Rams fans as the season draws closer.

Justin Cox, who is a Chiefs rookie, was arrested early this week on domestic violence and burglary charges in Mississippi. It’s the second time in the last eight months that he’s been arrested on those same charges.
Cox was signed by Kansas City as an undrafted rookie a couple of months back.

The Vikings and RB Adrian Peterson, who is attempting his comeback to the NFL, “mutually agreed” to restructure the last three years of his contract this week.
Peterson will reportedly be getting a guaranteed $13 million in salary for 2015, along with some guaranteed money in 2016 as well.
Peterson missed 15 games last year due to child abuse allegations and the fallout surrounding them. For a time, it was unclear if he’d even remain with the Vikings at all.

The pick in this article is the opinion of the writer, not a Sports Chat Place site consensus.
Previous Pick
NFL Teams With the Top Ten Most Losing Seasons
Next Pick
Top Ten Most All-Time NFL Interceptions