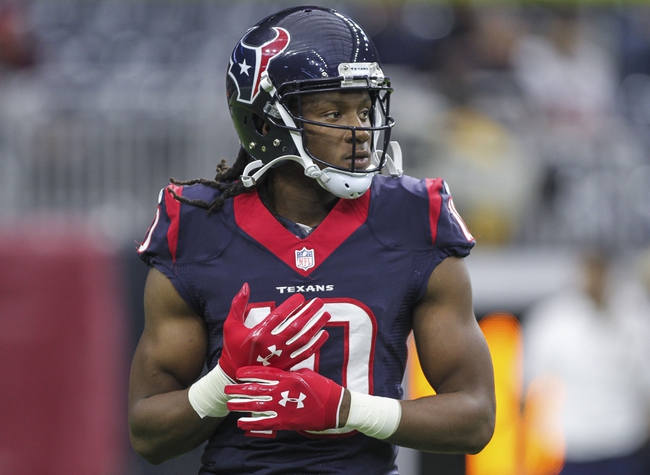 With NFL training camps underway, there’s plenty of news coming out each day from around the league. That said, let’s check out some of the notable names and situations in the headlines right now.

The Panthers’ Star Lotulelei had to leave practice on a cart yesterday due to a foot injury. The scene was reminiscent of his broken foot suffered in the playoffs during January, which forced him to miss the Seahawks game.

It’ll be interesting to see what Texans WR DeAndre Hopkins is able to do as the No. 1 guy in Houston. Now that Andre Johnson is gone, he’ll be the top target.
Hopkins posted nice numbers last year: 76 catches for 1,210 yards. What makes those stats even more impressive was the Texans’ QB carousel, which had him catching passes from no less than four different guys.

The Ravens’ Matt Elam was injured during practice over the weekend, and now it’s been reported that he’ll be missing the entire 2015 season due to a torn biceps.
Elam will have to undergo surgery to correct his injury and has a 4-6 month timeline for recovery.

It looks like embattled OL Richie Incognito has made a good impact on his new team. Bills coach Rex Ryan named him a starter this week.
Incognito inked with the Bills in February for a fresh start following a bullying scandal in Miami that dominated the NFL talk for several weeks.

The Redskins’ Tevin Mitchel, who was a sixth-round pick at cornerback this year, tore his labrum in is shoulder over the weekend and will need surgery.
Mitchel will now likely be out for the season. It’s his second torn labrum over the past year. He tore the other one (right shoulder) before his senior season.

The Chargers’ Tenny Palepoi will be out for the season as well. He fractured his foot and has been placed on the Reserved-Injured list.
Palepoi played in all 16 games last season, his rookie year.

The pick in this article is the opinion of the writer, not a Sports Chat Place site consensus.
Previous Pick
Toronto Argonauts vs. Hamilton Tiger-Cats CFL Pick, Odds, Prediction - 8/3/15
Next Pick
Top Ten Most NFL Tickets Sold in 2014