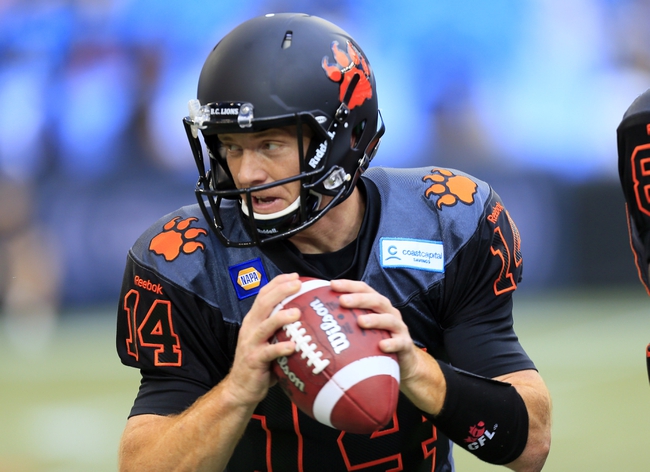 The Line: BC Lions PK -- Over/Under: 47.5 Click to Get Latest Betting Odds

The Edmonton Eskimos and BC Lions square off early Thursday night at the BC Place.

The Edmonton Eskimos look to continue rolling and build on their four-game winning streak. Matt Nichols is completing 60.5 percent of his passes for 958 yards, six touchdowns and five interceptions. Nichols has three touchdowns and three picks in his last three games. Adarius Bowman and Kenny Stafford have combined for more than 600 receiving yards and six touchdowns while Kendial Lawrence has three touchdowns on 14 catches. The Edmonton Eskimos ground game is averaging 98.8 yards per contest, and Shakir Bell leads the way with 268 yards on 39 carries. Defensively, Edmonton is allowing 12.6 points and 300 yards per game. Patrick Watkins leads the Eskimos with 23 tackles and three interceptions while Marcus Howard and Dexter McCoil have combined for seven sacks.

The BC Lions need a win to snap back-to-back losses and get back to .500. Travis Lulay is completing 64.2 percent of his passes for 1,205 yards, eight touchdowns and five interceptions. Lulay has two touchdowns and four picks in his last two games. Emmanuel Arceneaux and Andrew Harris have combined for close to 500 receiving yards and two touchdowns while Austin Collie has two touchdowns on 19 catches. The BC Lions ground game is averaging 110.2 yards per contest, and Harris leads the way with 401 yards and three touchdowns. Defensively, BC is allowing 27.2 points and 439 yards per game. Adam Bighill leads the Lions with 39 tackles, T.J. Lee has two interceptions and Alex Bazzie has two sacks.

BC has beaten Edmonton in five of the last seven meetings and could seriously use a win to get back on track after two straight losses. However, Edmonton has been great defensively and will be tough to bet against in a pick em game. I'm going to side with the road team here.

The pick in this article is the opinion of the writer, not a Sports Chat Place site consensus.
Previous Pick
Top Ten Fewest Tickets Sold in the NFL in 2014
Next Pick
Top Ten Highest NFL Average Attendances in 2014