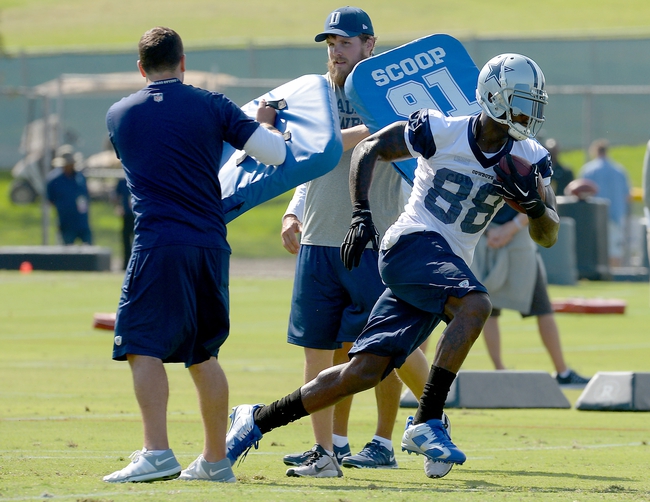 The NFL preseason officially begins tonight with the annual Hall of Fame Game. Before we get settled in for the kickoff, let’s check out some of the notable headlines dominating the league this morning. Here’s the latest.

The Cowboys’ Dez Bryant was out of practice yesterday thanks to a minor hamstring strain.
Bryant hurt himself during Thursday’s practice session and is classified as day-to-day right now. It doesn’t sound serious, but it’s a situation Cowboys fans will want to keep an eye on.

The Broncos’ C. J. Anderson had to leave practice yesterday due to a slight shoulder injury.
The good thing is that his condition doesn’t sound too serious; Anderson wanted to go back in after the injury but was held out as a precaution.

In other training camp bump-and-bruise news, the Chiefs’ new No. 1 WR Jeremy Maclin suffered a jammed thumb during yesterday’s practice.
Maclin was able to return to the practice field after the injury, so he should be just fine.

The Cowboys’ Brandon Carr broke a bone in his hand during Thursday’s practice session, sources close to the team reported yesterday.
Carr is going to have surgery to fix his break tomorrow. As of yet there’s no concrete timetable for a potential return to action. It doesn’t sound terribly serious, however.

Let’s move on to the Texans and check out a couple of injury situations with that team.
RB Chris Polk was able to return to the practice field yesterday, which is a good sign that he’s getting over his lingering hamstring issue.
In other RB news, No. 1 back Arian Foster had successful surgery on his injured groin on Friday. There’s a growing sentiment that he could potentially return to the field after 4-6 weeks now, which is quite the improvement over his initial three-month diagnosis.