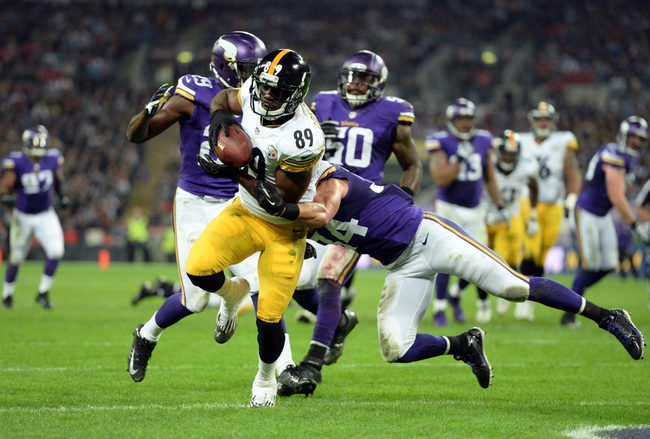 The Minnesota Vikings and Pittsburgh Steelers meet Sunday night in the Hall of Fame Game at Fawcett Stadium.

The Minnesota Vikings head into the preseason with a new and improved offense that should have no trouble moving the ball. A second year of QB Teddy Bridgewater, return of Adrian Peterson at running back and the addition of Mike Wallace give the Vikings some cooking gas. The Vikings defense has a ton of potential with young defenders such as Sharrif Floyd, Anthony Barr and Xavier Rhodes. Also, the addition of Terence Newman at cornerback gives the defense a leader and a 36-year-old who can still play at a solid level. Of course, preseason games come down to backup quarterbacks, and while Shaun Hill provides experience, Mike Kafka has not thrown a regular season pass since 2011. Kafka and Taylor Heinicke are battling it out for the third quarterback job.

The Pittsburgh Steelers offense doesn’t need that many reps with experienced players such as Ben Roethlisberger, Antonio Brown and Heath Miller returning for yet another season. This means you’re going to see a lot of Landry Jones and Tajh Boyd, especially with the injury to No. 2 quarterback Bruce Gradkowski. While Jones and Boyd were great in college, neither has thrown an NFL regular season pass. I really like Pittsburgh’s depth at running back with DeAngelo Williams and Dri Archer backing up Le'Veon Bell. Defensively, the Steelers got a lot younger and probably want to give some of their guys more reps, which includes Stephon Tuitt, Jarvis Jones and Ryan Shazier, all guys who have been in the league three or less seasons but are expected to be starters.

Preseason games are all about the backup quarterbacks, as starters don’t see much playing time. Neither has experienced depth behind their starters, but the Steelers are going to play two guys who have a combined four years in the league and haven’t thrown a single NFL pass. At least Minnesota has Hill to rely on for a quarter or two.

The pick in this article is the opinion of the writer, not a Sports Chat Place site consensus.
Previous Pick
Winnipeg Blue Bombers vs. Hamilton Tiger-Cats CFL Pick, Odds, Prediction - 8/9/15
Next Pick
NFL News: Player News and Updates for 8/10/15