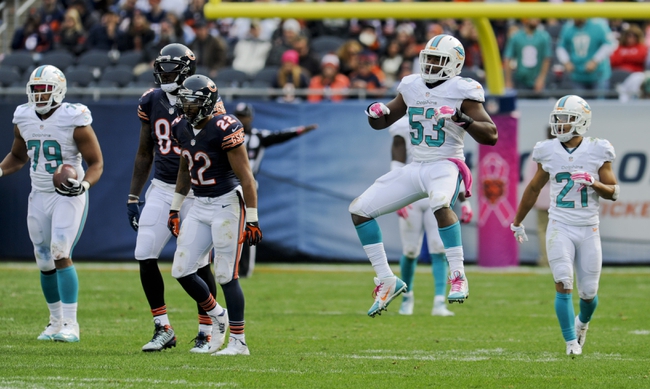 The Miami Dolphins and Chicago Bears square off Thursday night at Soldier Field in preseason ball.

The Miami Dolphins are thinking playoffs for the first time since 2008. Offensively, the Dolphins look pretty good for once with another season of Ryan Tannehill, and the additions of Greg Jennings, Kenny Stills and DeVante Parker. There’s no reason why the Dolphins shouldn’t have a several 30-point games this season. As for backup quarterbacks, Matt Moore is your clear No. 2 while McLeod Bethel-Thompson should get the reps in the fourth quarter, a third-year player who hasn’t thrown an NFL pass. Defensively, Cameron Wake and Ndamukong Suh form a scary defensive line, while Brent Grimes is a terrific shutdown corner. Walt Aikens, Brice McCain and C.J. Mosley are three key defensive players who are fighting for a step up in playing time.

The Chicago Bears look to get back to the playoffs for the first time since 2011. Like it or not, Jay Cutler is going to lead the Bears offense, and he has a lot of weapons around him including Alshon Jeffery, Matt Forte and the highly talked about Kevin White. There’s no reason why the Bears offense shouldn’t be able to move the football and be competitive. Jimmy Clausen somehow finds himself as the No. 2 option, while Shane Carden is the third string until David Fales returns from his illness. Defensively, the Bears have to be looking at their options after stinking up the joint last season. Jared Allen, Kyle Fuller and Antrel Rolle provide a nice core to build around but depth has to pick up. Close eyes will be kept on Eddie Goldman, Jonathan Bostic and Sam Acho this preseason.

The Dolphins are just a deeper team than the Bears. I have far more confidence in Miami's starter and backup QB than Chicago's. Preseason ball to me is almost all about the quarterback depth, and the Dolphins have a huge advantage here. Give me the road team in a pick em.