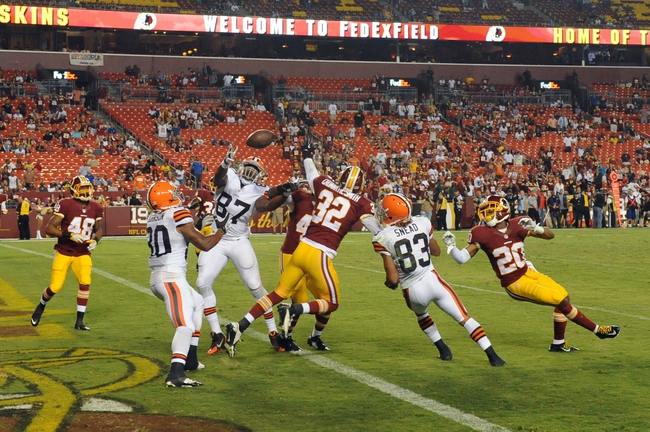 The Washington Redskins and Cleveland Browns meet Thursday night in the preseason at FirstEnergy Stadium.

The Washington Redskins look to get back on track after winning a combined seven games their last two seasons. With DeSean Jackson, Pierre Garcon and Alfred Morris, the Redskins offense has the potential to be great, but it all comes down to the production and turnaround of quarterback Robert Griffin. I wouldn’t be surprised if RG3 gets more than the usual two drives in hopes he gets his confidence going. Kirk Cousins and Colt McCoy should get a quarter apiece as the backup QBs. Defensively, the Redskins know they have to be better and it all starts starts up front with Stephen Paea and Jason Hatcher. Jackson Jeffcoat and Phillip Thomas are two defensive players who could make a difference this preseason for Washington.

The Cleveland Browns hope to take another step forward with a young, promising team. The additions of Dwayne Bowe and Brian Hartline will help Cleveland’s offense, but it all comes down to improved quarterback play. Josh McCown and Johnny Manziel will get the bulk of the Browns’ reps for the starting job, while Thaddeus Lewis and Connor Shaw should split time late for the third string position. Defensively, the Browns have some impressive building blocks with Randy Starks, Karlos Dansby and Joe Haden. Now it comes down to Cleveland’s depth to really take that next step, as Scott Solomon, Chris Kirksey and Jordan Poyer are three key guys who are looking for increased playing time and are taking the preseason seriously.

I like the Browns at home, as they actually have a real quarterback battle going on, which usually gets the best out of guys and results in some actual points. The Redskins are really only worried about getting Griffin back on track and nothing else. Give me Cleveland in a home victory.