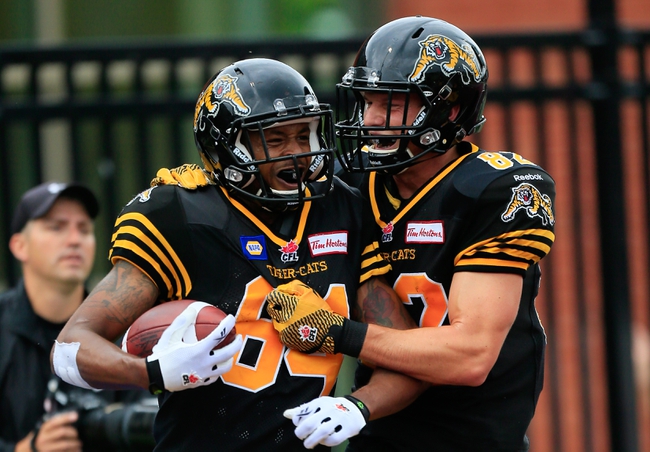 The BC Lions and Hamilton Tiger-Cats square off Saturday night at Tim Hortons Field.

The BC Lions look for a win to get a game above a .500 record. Travis Lulay is completing 62.2 percent of his passes for 1,400 yards, 10 touchdowns and seven interceptions. Lulay has three touchdowns and five interceptions in his last two games. Emmanuel Arceneaux and Andrew Harris have combined for more than 600 receiving yards and four touchdowns while Austin Collie has two touchdowns on 22 catches. The BC Lions ground game is averaging 113.2 yards per contest, and Harris leads the way with 519 yards and four touchdowns. Defensively, BC is allowing 26.5 points and 427.2 yards. Adam Bighill leads the Lions with 46 tackles and T.J. Lee has two interceptions and Craig Roh has two sacks.

The Hamilton Tiger-Cats look to win their fourth straight game and pull away in the East. Zach Collaros is completing 70 percent of his passes for 1,724 yards, 10 touchdowns and six interceptions. Collaros has six touchdowns and two picks in his last two games. Bakari Grant and Terrence Toliver have combined for more than 700 receiving yards and seven touchdowns while Andy Fantuz has 30 receptions. The Hamilton Tiger-Cats ground game is averaging 79.3 yards per contest, and C.J. Gable leads the way with 140 yards on 22 carries. Defensively, Hamilton is allowing 19 points and 343.3 yards per game. Simoni Lawrence leads the Tiger-Cats with 25 tackles, Emanuel Davis has three interceptions and Ted Laurent has three sacks.

Lulay has been way too turnover prone for my taste, especially in his last two games. The Tiger-Cats have simply been on fire in their last two home games and I expect that to continue here. Give me the home team to win by double digits.

The pick in this article is the opinion of the writer, not a Sports Chat Place site consensus.
Previous Pick
NFL News: Player News and Updates for 8/15/15
Next Pick
49ers at Texans - 8/15/15 NFL Pick, Odds, and Prediction