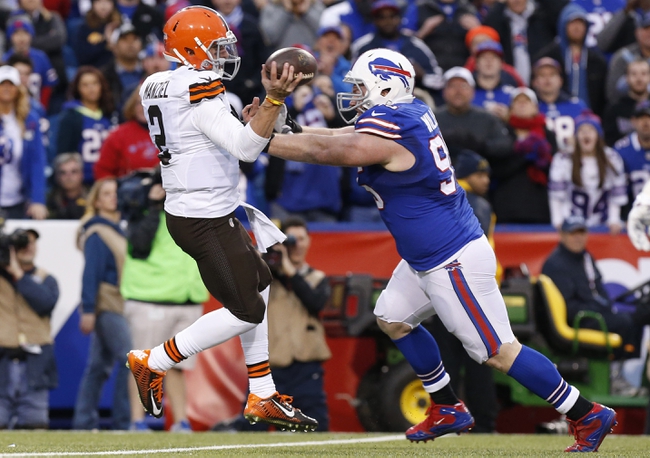 The Buffalo Bills lost their first preseason game to the Carolina Panthers, 25-24. EJ Manuel led Buffalo with 77 passing yards and a touchdown, but Tyrod Taylor made things quite interesting with 49 passing yards and 47 rushing yards. I’d expect Taylor to get a lot more reps and a chance to throw his name in the hat for the starting QB job. Bryce Brown led the Bills with 52 rushing yards on six carries and Deonte Thompson had 61 receiving yards on two receptions. The Bills showed some depth on the offensive side of the ball but the quarterback question isn’t anywhere close to being answered. Defensively, Mario Butler led the Bills with six tackles, Ronald Darby had two pass deflections and Ron Brooks had Buffalo’s only sack.

The Cleveland Browns lost their first preseason game to the Washington Redskins, 20-17. Connor Shaw led the Browns with 64 passing yards, but it was Johnny Manziel who stole the show with 42 passing yards and a rushing touchdown. Manziel made good decisions with the ball and actually looked like a QB who could give Josh McCown a run for his money for the starting job. Terrance West had 10 rushing yards on four carries and Brian Hartline had 30 receiving yards on three receptions. The Browns had their moments in their first preseason game but have to get their ground attack going. Defensively, Chris Kirksey led the Browns with six tackles, Landon Feichter had a tackle for loss and Xavier Cooper had Cleveland’s only sack.

I really like the Browns quarterback depth, and I expect Manziel to play a little more than he did in the debut. In a toss-up game, I'm siding with the Browns.

The pick in this article is the opinion of the writer, not a Sports Chat Place site consensus.
Previous Pick
Lions vs. Redskins - 8/20/15 NFL Pick, Odds, and Prediction
Next Pick
Top Ten Worst 2015 NFL Offseason Injuries