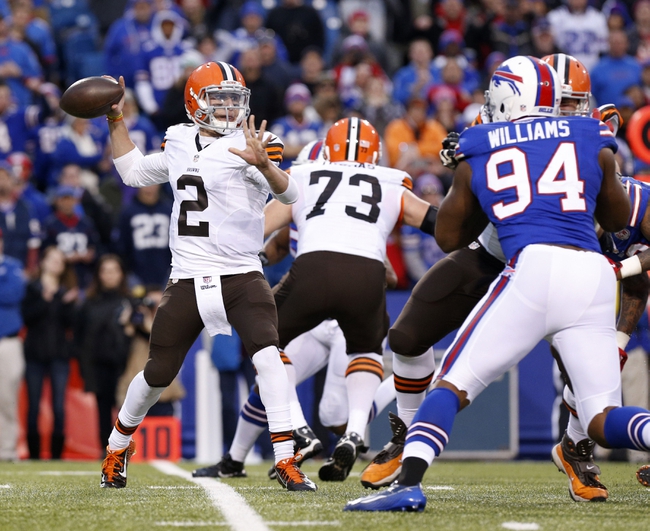 The Browns and Bills meet up in Cleveland on Thursday as both teams look for their first victory of the preseason.

The Buffalo Bills head into the season with massive expectations after some offseason moves put them in the discussion as an AFC East contender but until they can find an answer at quarterback those expectations will be hampered a bit. Buffalo is coming off a one point loss and will look to give Rex Ryan his first unofficial victory with his new team but on the road in Cleveland even in the preseason isn't the easiest place to get a victory, especially against a team with so many people playing for starter's minutes. Buffalo, aside from the quarterback position, is set pretty well across the board and likely will use this game as a showcase for Tyrod Taylor and EJ Manuel and I wouldn't be surprised to see most of if not all of the Bills' starter's on the sidelines for this one.

The Browns much like the Bills are in a tough spot behind centre as the debate between Johnny Manziel and Josh McCown continues to heat up and while many are siding with the journeyman McCown, Johnny Football looked decent in his preseason debut last week. One thing the Browns need to address is the play of Justin Gilbert as training camp stories continue to emerge surrounding the lack of production out of their highly touted corner back and in his preseason opener against the Redskins last week he was targeted on a number of occasions when marking Pierre Garcon. Cleveland could be in for a tough season as they have made a number of changes on both sides of the ball but in this situation I look for the team who will be fielding more starters for longer and in both cases I am siding with the home team and give Cleveland the nod.

The pick in this article is the opinion of the writer, not a Sports Chat Place site consensus.
Previous Pick
Lions vs. Redskins - 8/20/15 NFL Pick, Odds, and Prediction
Next Pick
Top Ten Worst 2015 NFL Offseason Injuries